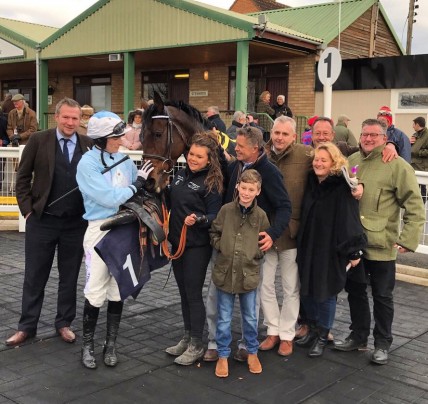 THIS WEEK   The temperature has dropped dramatically again this week as we sail towards December.  And despite some more ups and downs with sad news to report on Emerging Force who unfortunately has picked up a very small tendon injury, our spirits have been lifted with two more winners in the last two consecutive days.  We've also had the TV cameras in, so keep an eye out for our feature in 'This Racing Life' on Racing UK over the next couple of days.  We're heading to our favourite local track today, Newbury where we've got two lovely horses running both with great chances so we'll just keep kicking...   REPORTS   Star Tackle finished an agonising 2nd at Ffos Las last Friday.  He sat just behind the leader for much of the contest and produced a sound round of jumping.  He didn't travel with the same zest as he did at Ayr, which was down to the very testing ground.  Turning for home Harry asked Star to press the leader and a big jump at the 3rd last took him to the lead.  He went a couple of lengths clear coming to the last and a big jump looked to have sealed the win, but he was run down in the shadow of the post by the strong staying Pure Vision.  This was a frustrating result but a cracking run nevertheless.  He should keep on improving from here and we will avoid very testing conditions in the future.   Bridge of Cally ran a blinder to finish 5th on hurdling debut at Huntingdon on Saturday.  He jumped off in front under Harry Bannister and although he showed signs of greenness, he jumped very well in the main.  The race developed down the far side and when Harry asked Bridge to go on he duly did and the field soon strung out.  Turning in he was caught flat footed but stayed on well to almost grab 4th on the line.  It was a very pleasing debut, and a career best.  He will appreciate a step up in trip down the line.   Zephyros Bleu fell when still in contention at Uttoxeter on Sunday.  Although it was a small field there was a fair bit of pace, so he settled just behind the leaders.  He didn't jump as well as he did at Exeter and didn't seem to enjoy the quirks of this track as much either.  He did travel through the race though and enjoyed the ground.  The leaders kicked on at 5 out and Harry asked Zephyr to close.  He hadn't asked for all of his effort when he made a mistake at 3 out and came down.  He was none the worse for the fall and we will go to a more conventional track next time.   Vinnie Lewis produced a fantastic performance to win at Sedgefield on Tuesday.  He sat 2nd most of the way around, travelled well and jumped very tidily.  Cabragh injected pace going out on the far side for the final time and this lead to Vinnie's only mistake of the race.  He soon closed the gap to the leader and headed him turning out of the back.  Vinnie winged 3 out and cruised up the straight to win by 14 lengths.  He's been ultra consistent and deserved this first win under rules.  There's more to come from him going forward.   Court Liability made it 3 from 3 for the yard, with a gutsy display at Hereford on Wednesday.  They went a very good gallop throughout and Court settled well in about 4th place.  He produced a far more professional jumping display on this occasion and although he was on and off he bridle throughout, he came to the top of the hill in contention.  Stage Summit slipped the field and Court had 5 lengths to make up between the last 2 obstacles, but he stuck his head down, winged the last and picked up nicely to win by 2 lengths.  This was a cracking performance and there's plenty more to come from him, especially as he steps up in trip.   Affaire D'Honneur finished 5th on chase debut at Musselburgh yesterday.  He jumped off in a handy position and got into a nice rhythm under jockey Harry Bannister.  The pace lifted turning into the home straight and he was outpaced.  A slow jump at 3 out meant he lost contact with the leaders, eventually finishing 5th.  A step up in trip is likely next time.   Tangoed finished 11th on her 3rd hurdle start at Towcester yesterday.  It was a big field and there was a lot of hustle and bustle early on.  This effected her jumping and she became a bit careful.  The field got racing early and she was outpaced with just under a mile to go, but to her credit she stuck her head down and stayed on nicely up the hill.   A step up in trip should suit her next time out. 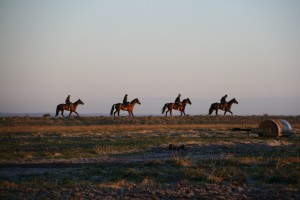 ENTRIES   Simply The Betts is set to make his hurdling debut at Newbury today.  The galloping track should really suit him, his bumper form has worked out very nicely and we can't wait to learn some more about him.  He has always shown a lot of ability at home and he now has another chance to show it on the track.  His schooling has been excellent.   Bigmartre is set to have his 2nd start of the season at Newbury today.  He produced an excellent performance at Ludlow last time out, jumping accurately and winning in an impressive time.  A mark of 137 still looks workable and although he steps up in class here, he has to have a good chance.  This is a race we won with Arzal 2 years ago and it would be great if BigM could follow in his footsteps.   Blue Valentine is set to have her first start for the yard at Doncaster tomorrow.  She has had lots of problems since joining the yard 18 months ago, but is now ready to step foot on the track.  She showed a lot of ability in both of her starts in France, her work has been good and we can't wait to get her out.  Hopefully she can reward her connections patience and make up for lost time.   Octagon is set to have his 2nd start of the season at Leicester on Sunday.  He had to work hard to win a seller last time out and the penalty will make things more difficult.  Hopefully he can be competitive.   Eyesopenwideawake is set to have his 2nd chase start on Southwell on Tuesday or Sandown on Friday.  He produced a foot perfect jumping display to win at Kempton last time and a mark of 125 still looks workable.  The drop back to 2m should be in his favour and if he can't produce a similar performance he won't be far away.  He remains in great form.