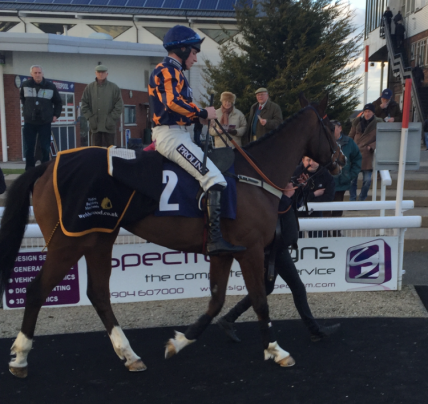 NEWS: Two excellent placed efforts over the past few days have shown the string remains in good form. We have a handful of runners coming up in the coming days. Let’s hope they can keep the yard in the winner’s enclosure. REPORTS: BIGSOCIETY finished an excellent 3rd in a competitive Handicap Chase at Ffos Las on Sunday. The switch back to a more galloping track really suited him. Big S jumped off in mid field and travelled better than any other run this season. His jumping was also far sharper and David Bass got him into a good rhythm. He was on and off the bridle throughout the race but was never detached at any stage. As the race developed turning for home Big S started to stay on nicely, but the two leaders quickened away at the top of the straight and he was never able to get on terms with them. We were delighted with the run and we looked forward to getting him out again under similar conditions. ZEPHYROSBLEU finished a close 2nd at Wetherby on Tuesday. He travelled better on this occasion and produced his best jumping display to date. Gavin positioned him in mid field and that’s where he stayed until the race started to develop down the back straight. Gavin asked him to close on the leader and Zephyr pick up nicely for him. He looked to be going best turning for home, and was sat a length off the leader ready to make his challenge at the 3rd last. He pecked on landing and lost a fair bit of momentum and the leader went 5 lengths clear. He jumped the last 2 really well and stayed on powerfully to go down by just over a length. He would have been closer if the winner hadn’t hung across him in the run-in. Zephyr is progressing with every run and another step up in trip to 3 miles will really suit. ENTRIES: QASSER has been declared to run at Chelmsford tonight in a 10f handicap at 8.40 , he had no luck in running the last day at Wolverhampton and has been dropped 1lb by the handicapper for that. This is a drop in class for him, but still quite a competitive race. He is well drawn in stall 5 and we are delighted that Luke Morris rides, as he knows him well and won on him last year.  Granted some luck we hope he can run a big race, he ran well at Chelmsford last year. The plan is to run FOUROVAKIND in the Devon National at Exeter tomorrow at 3.55 . He shaped well for a long way in the Welsh National before being pulled up, and the handicapper has dropped him 3lb to a mark of 124. He progressed through the season last year and we hope he will do the same again this year. He has run well at the course before, the ground should suit him and the trip shouldn’t be an issue. If he can get into a nice rhythm we hope he will run very well!! FARBREAGA is set to make his debut for the yard at Warwick as well tomorrow at 4.15 . We haven’t had him long so this race will be a bit of a fact finding exercise, but we are looking forward to getting him going. He has settled in nicely, has schooled well and goes into the race in good form. Fab is 1lb higher that his last win, but was pulled up on his last 3 runs. We’d like to see a clear round and an improved performance, the trip and ground should be fine so let's see how we go.. SCARPER is likely to make his debut at Southwell in a Newcomers Bumper on Sunday at 5.10  . He was purchased from the breeze-up sale at Cheltenham in November and has shown himself to be forward both physically and mentally at home. A newcomer’s race should really suit him and the 4yo weight allowance should also help. He shows quite a lot of speed at home and has a very good attitude, so we are looking forward to getting him going. Until next week,