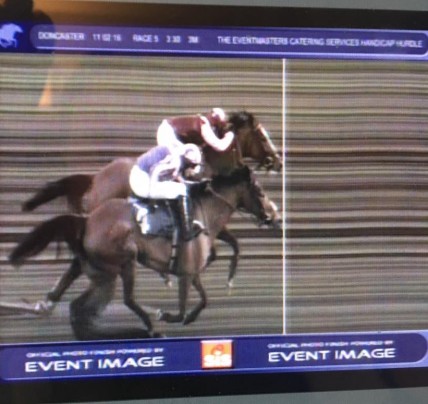 After a streak of some very good placed efforts the yard was back on the winning trail this week with 2 winners, taking the season total to 18. Affaire D’Honneur takes his chance in the richest Handicap Hurdle of the season tomorrow at Newbury, we had a lot of bad luck in the race last year with Arzal who finished 6th so fingers crossed for better fortune tomorrow!! ATTHERACESTABLETOUR-HARRYWHITTINGTON SPORTINGLIFE-HAVEANAFFAIREINTHEBETFAIR ENTRIES: Our highest profile runner of the week is AFFAIRED'HONNEUR , who runs at Newbury tomorrow in the Betfair Hurdle at - 3.30 . He ran a brilliant race on debut for the yard at Kempton in December to finish 2nd in a competitive race. The handicapper has raised him 8lb to 132, giving him the opportunity to get into the bottom of this race. He has improved since Kempton and is still unexposed after only ever having 3 starts over hurdles. The switch to softer ground and a more galloping should really suit him and we can’t wait to get him out. It is a hugely competitive race as it always is with the likes of Blazer, Modus and War Sound lining up, but we feel if he can take another step forward he should be right in the shake up - Gavin Sheehan rides!! FATCATINTHEHAT also runs tomorrow at Warwick in a 2 mile Handicap Hurdle at 4.25 . He ran very well for a long way at Haydock on his first start for the yard, before weakening close to home. Gavin felt his wind stopped him that day so he has had a wind operation since his last run. A mark of 119 looks workable and the slight drop in grade should really suit. If he can finish off his race we hope he will run big. It is a competitive race for the grade, with the Evan Williams trained Clyne looking the one to beat. Nico de Boinville rides Fatcat for the first time, but thankfully is in amazing form after riding a four timer today at Kempton.

We are likely to have two runners at Plumpton on Monday; The first of those is PATRONNE who will make her debut for the yard in a Mares Novice Hurdle that Mollasses won last year at 2.00 . She had been declared at Fakenham and Ludlow in the last couple of weeks but unfortunately both meetings were lost to the weather so have rerouted to this race. She has been in great form at home and she has a lot of speed so we are looking forward to learning some more about her on the track. It looks a competitive race at this stage but she will receive weight for age allowance which is very useful, as she is a big scopey filly and more like a 5 yr old in physique. PASSINGDUMOULIN will make his debut in a bumper on the same card at 4.30 . He hasn’t stopped growing since he arrived from France in April and had taken some time to come to hand, but of the last month or so he has been showing the right signs and is ready to take his chance on a racecourse. Moulie is a half-brother to the smart chaser Chartreux and is a big, scopey individual. We can’t wait to get him started and the experience is exactly what he needs. REPORTS: PINKPLAY made the trip up to Wetherby last Saturday a winning one, with a very gutsy display on very testing ground. Secret Door re-opposed but on 6lb better terms with Pink Play in a bit of a match race. The ground was very testing and they went an even gallop throughout the race. Nico de Boinville tracked Secret Door throughout the race and was able to hold a rail position, which proved crucial in the closing stages. The race thinned out swinging into the home straight and they locked horns. Pink Play jumped to the front 2 out, but Secret Door then headed her coming to the last. Pink Play produced a better leap than her rival at the last and stayed on past Secret Door with the rail to help. She showed a wonderful tough performance to win under a penalty on ground she hated. Pink Play is by Kings Theatre and will enjoy a switch back to a sounder surface. EMERGINGFORCE made it 2 from 3 starts for the yard with a last gasp win at Doncaster yesterday. We were hopeful the return to better ground and a step up in trip would bring about improvement and it did exactly that. There was a strong pace early and the 19 runner field was a bit of a shock to Emerging Force as he got shuffled back early on. As the race developed Force was able to creep into the race under Richard Johnson, and his jumping was excellent throughout. The Harry Fry trained Whataknight looked to be going best turning into the home straight and quickened nicely to slip the field. Emerging Force was off the bridle but responding to Richard Johnson to look the only possible challenger. He looked destined for 2nd at this stage, but jumping the last the leader looked tired. Force battled gamely up the run in and made up 4 lengths to pip the leader on the final stride. He is a chaser in the making, which makes this is all a bonus over hurdles and he should be competing at the highest level in 2 years time!! QASSER finished 7th on his return to the flat at Wolverhampton on Friday last week. He broke well and was able to take up a good position in 2nd early on, but as the race took shape he got shuffled onto the rail behind the leader. Turning for home Qasser got trapped in a pocket and had nowhere to go when the race quickened up. He was hampered and his race was over with Joe Fanning letting him come home in his own time. We still feel he is on a workable mark on the flat, so he will be aimed at a similar contest in the coming weeks. Hopefully he will have some better luck in running next time before switching back to hurdles when we get some better ground come the Spring. Until next week,