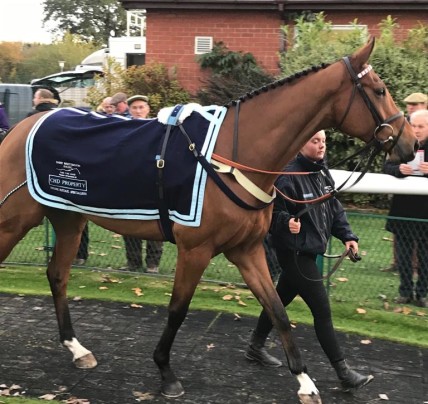 THIS WEEK We've had another busy week as the season really gets underway.  The yard is buzzing with activity and the wait is finally over.  Rain is still needed but who knows whats round the corner! 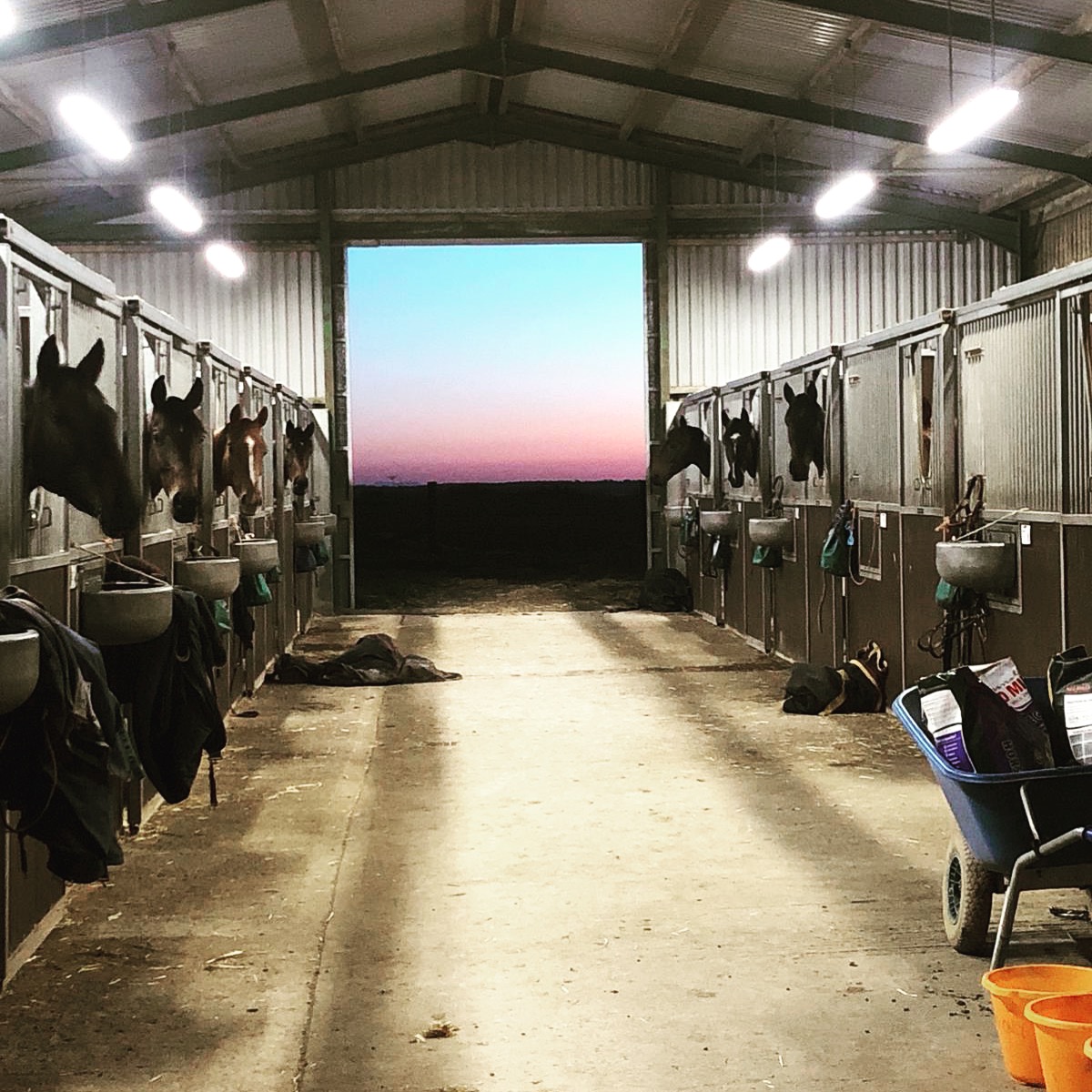 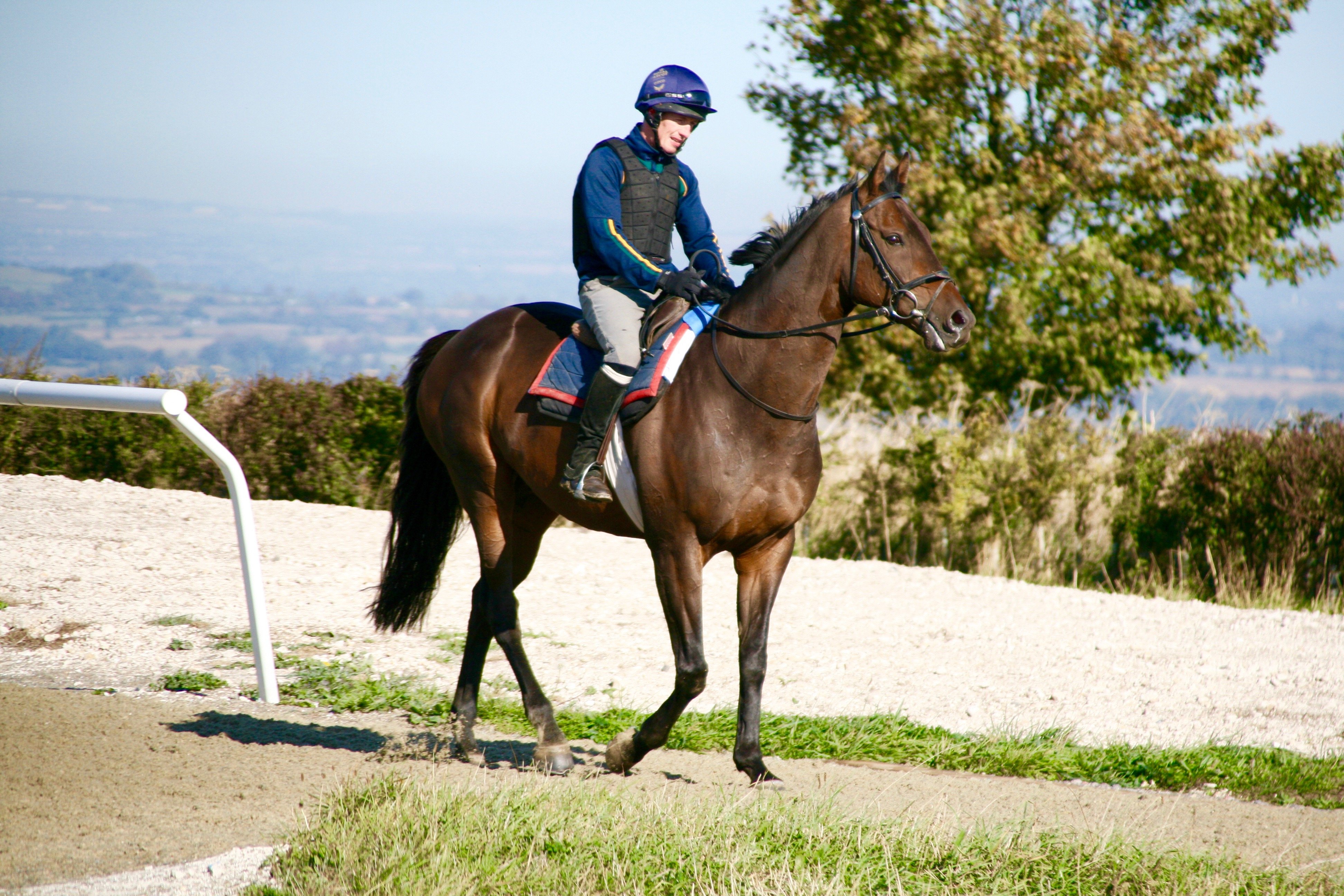 REPORTS BIGMARTRE Bigmartre finished 6th on his seasonal reappearance at Cheltenham on Saturday.  He sat second early on behind the keen going Foxtail Hill, but didn’t travel with his normal zest.  Despite not travelling like we know he can, another excellent round of jumping kept him in the mix.  It looked like he was going to be swallowed up by the pack coming to 3 out but a huge jump briefly took him to the front.  It got messy turning in and his run flattened out, eventually finishing 6th.  The rain on the day wouldn’t have helped but we know he’s better than this.  We will look to the 2m handicap chase on Ladbroke day at Newbury for him next. HENRIETTA BELL Henrietta Bell ran a race full of promise to finish 4th on debut for the yard at Aintree on Sunday.  She switched off nicely in mid division under a patient ride from Harry Bannister.  They didn’t go very quick early on and the race didn’t start to develop until the pace lifted on the final circuit.  Turning down the side she travelled smoothly into contention and was going as well as anything when the field entered the home straight.  As she started to make her move she was stopped on more than one occasion by the weakening front runner Sweet Adare and by the time she was able to get a passage through the front two had got away from her.  She picked up nicely for pressure and stayed on to finish 4th.  This was an unlucky yet very likeable debut and we feel she would have gone very close with a clear run.  She’s a very exciting recruit. 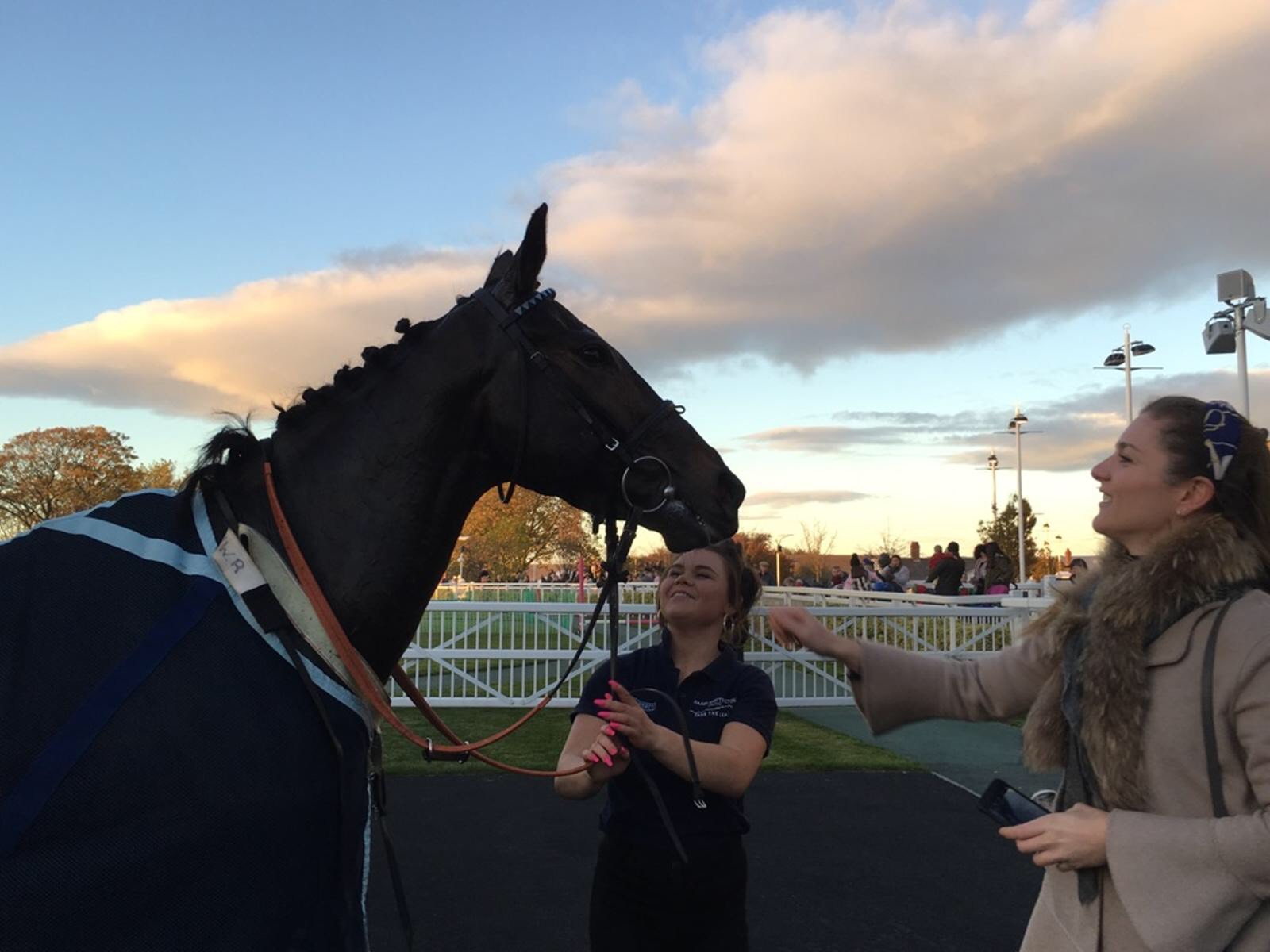 WEAPONS OUT Weapons Out was another who showed lots of talent on debut to finish 3rd in a bumper at Bangor on Tuesday.  He got trapped wide early on and that meant he got shuffled even further back around this turning track.  He was keen in the early stages, but soon settled well albeit nearer last than first.  Long time leader Tel’Art injected some pace inside the final half mile and Weapons Out came under pressure.  He had to come round a wall of horses and gave lots of ground away, but showed a good attitude and lots of ability to run on for 3rd.  This was an exciting debut and you can mark his performance up a fair bit.  He should run very well in a bumper next time. SALTO CHISCO Salto Chisco continued his consistent run of form by finishing 4th at Fakenham on Wednesday.  It was a strongly run race from the get go and Salto was rushed off his feet early on.  He jumped well throughout though and that kept him in contention.  The pace started to collapse on the final circuit and Salto made good progress to get on the heels of the leaders jumping 2 out.  He looked like he’d play a major part in the finished but his run flattened out turning in and he came home in 4th.  This was another solid run from this consistent 10yo who needs a little help from the handicapper to get his head back in front. SPEEDY CARGO Speedy Cargo finished 5th on his first hurdles start at Sedgefield yesterday.  He jumped off in the front line under Harry Bannister and was very slow at the first obstacle which gave the lead to eventual winner Ask Paddington.  He was deliberate at his hurdles throughout the contest and this put him on the backfoot, but to his credit he stuck to his task.  He was outpaced turning in but produced his best two jumps late on and stayed on all the way to the line to go down by just 2 lengths.  There's plenty of improvement in him and although this wasn't the most polished display there are positives to take from the run. ENTRIES MAJESTIC LORD Majestic Lord is set to make his racecourse debut at Uttoxeter today.  He’s a 4yo Youmzain gelding, whose a half brother to black type winners Noor Al Hawa and Majestic Jasmine.  This looks an open 12 runner affair with plenty of newcomers and hopefully he can run a decent race.  This is a bumper that’s only open to conditional and amateur riders so Harry Reed takes the ride. ANEMOI Anemoi is set to make his hurdles debut this week, he has options at Ascot and Wetherby tomorrow, Chepstow on Wednesday and Newbury on Thursday.  He showed plenty of ability last season, winning his bumper in good fashion at Huntingdon in January before running very well in a good bumper on Scottish National day at Ayr.  Schooling has gone well, better ground will be in his favour and he should be competitive wherever he goes. SIMPLY THE BETTS Simply The Betts is set to step into handicap company for the first time at Ascot tomorrow.  He’s won his maiden and novice hurdles in good fashion this season and he’s now ready to step up in class.  A mark of 130 looks workable off of some of his form last season, good ground is ideal for him and a strongly run handicap should really suit.  This is a very competitive Listed handicap hurdle but he is capable of being in the shake up.  He may well appreciate a step up in trip later in the season, so the stiff track will suit. LANTIERN Lantiern is set to make his first racecourse appearance in a bumper at Ascot tomorrow.  He was purchased from Cheltenham in December and has been given plenty of time to mature.  He’s a half brother to the smart chaser Call It Magic, he’s been working nicely and has been away for a racecourse gallop.  He’s an athletic individual who should be suited by the galloping track and decent ground.  Hopefully he can run well. JAMMY GEORGE Jammy George missed his intended engagement at Bangor this week and has hurdle options at Wetherby tomorrow and Chepstow on Wednesday.  As mentioned last week he showed a good level of form in heavy ground bumpers in Ireland before losing his way over hurdles.  Hopefully he can produce a better display here and get his career back on track.  He’s a half brother to Grade 1 winner Lucky William. 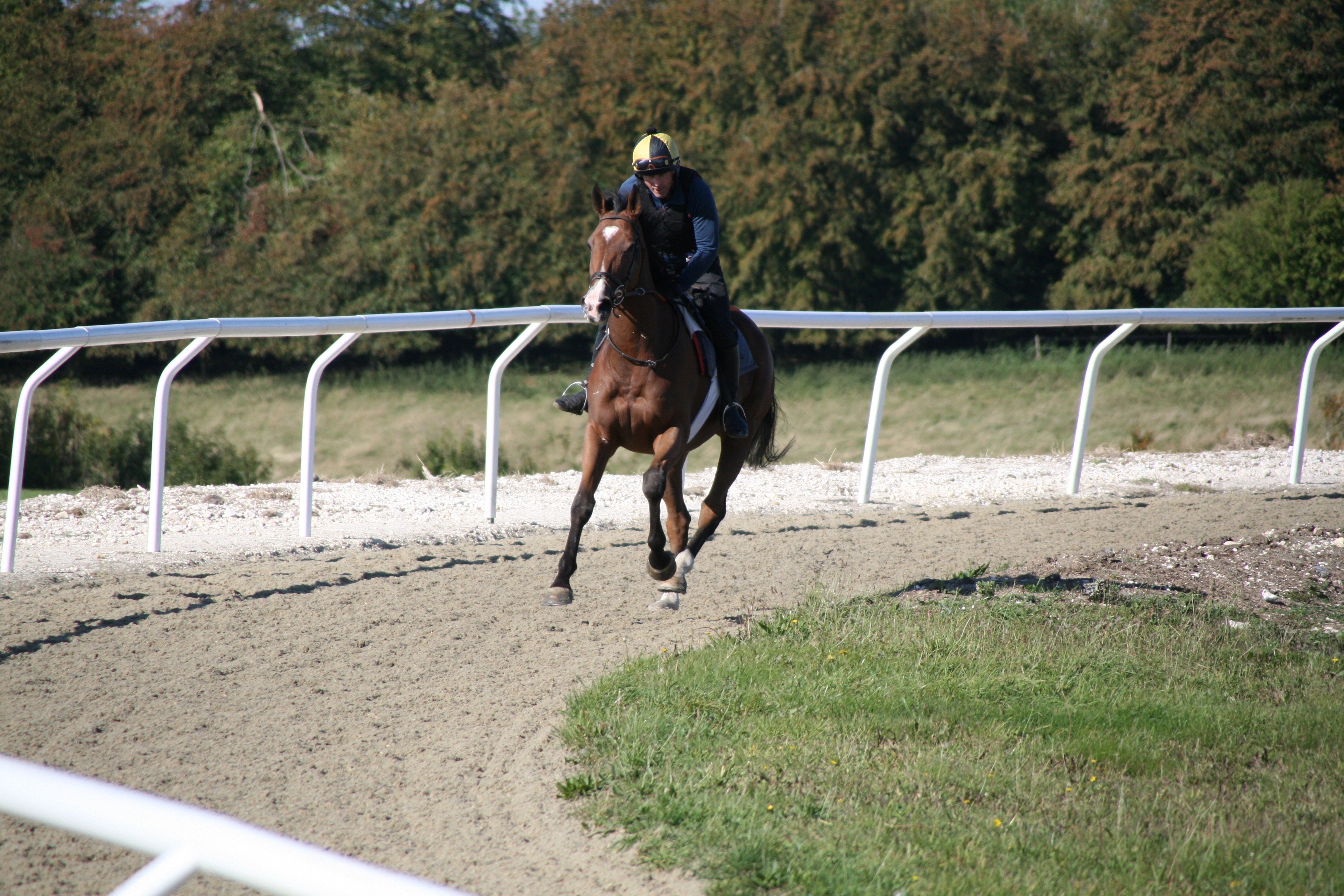 ROUGE VIF Rouge Vif has plenty of hurdles options in the coming week, the first two being at Plumpton and Hereford on Monday.  He was an impressive bumper winner in the Spring before running below his best at Newton Abbot in early October.  His fitness has improved for that first run, he’s been working and schooling well and if the ground is suitable he will take his chance somewhere but we could do with some rain. SAINT CALVADOS Saint Calvados has his first entry of the season in the Haldon Gold Cup at Exeter on Tuesday but is very unlikely to run because of fast ground.  He won 3 of his 4 starts last season, including an impressive win in the Kingmaker before running below his best in the Arkle at Cheltenham in March.  He’s still only 5 and there’s plenty more to come from him, but we need some significant rain before we consider running him.  He will also have an entry in The Fortria Chase at Navan next Sunday. THE DUBAI WAY The Dubai Way missed his entry at Sedgefield yesterday because the ground wasn’t soft enough for him and holds his next entry at Chepstow on Wednesday. He didn’t enjoy the quicker ground at Southwell last time and his jumping suffered because of it. We know he’s better than that display and granted some easier ground we are hopeful of an improved performance. A LITTLE EARLY A Little Early holds a bumper entry at Chepstow on Wednesday where he is set to make his racecourse debut.  He’s a 4yo gelding by Carlotamix from the family of decent chaser Therealbandit, he’s done everything that’s been asked of him at home and we are hopeful he can show some talent on his first start. GENIUS Genius is set to make his next bumper start in the next week or so and his first entry is at Newbury on Thursday.  He was an impressive bumper winner at Southwell back in May and the form of that race looks strong.  He did plenty wrong on the day so there should be lots to come from him and if he can be competitive under a penalty we know we’ve got a smart horse on our hands.  Good ground suits him best and if he doesn’t go to Newbury he has options at Aintree and Sandown next weekend.