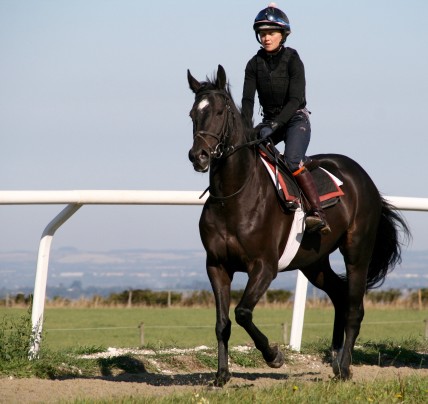 THIS WEEK The clocks have changed, the temperature has dropped and the rain has finally started to fall…but still, there’s a lot to look forward to this winter.  Seeing the big white face of Anemoi glide to victory in the first at Ascot on Saturday was an absolute delight to see, a really exciting day for all and a wonderful horse to look forward to.  Talking of which we've got a big day ahead of us tomorrow over in Ireland with Saint Calvados, who'll be kicking off his campaign for the new season at Naas... 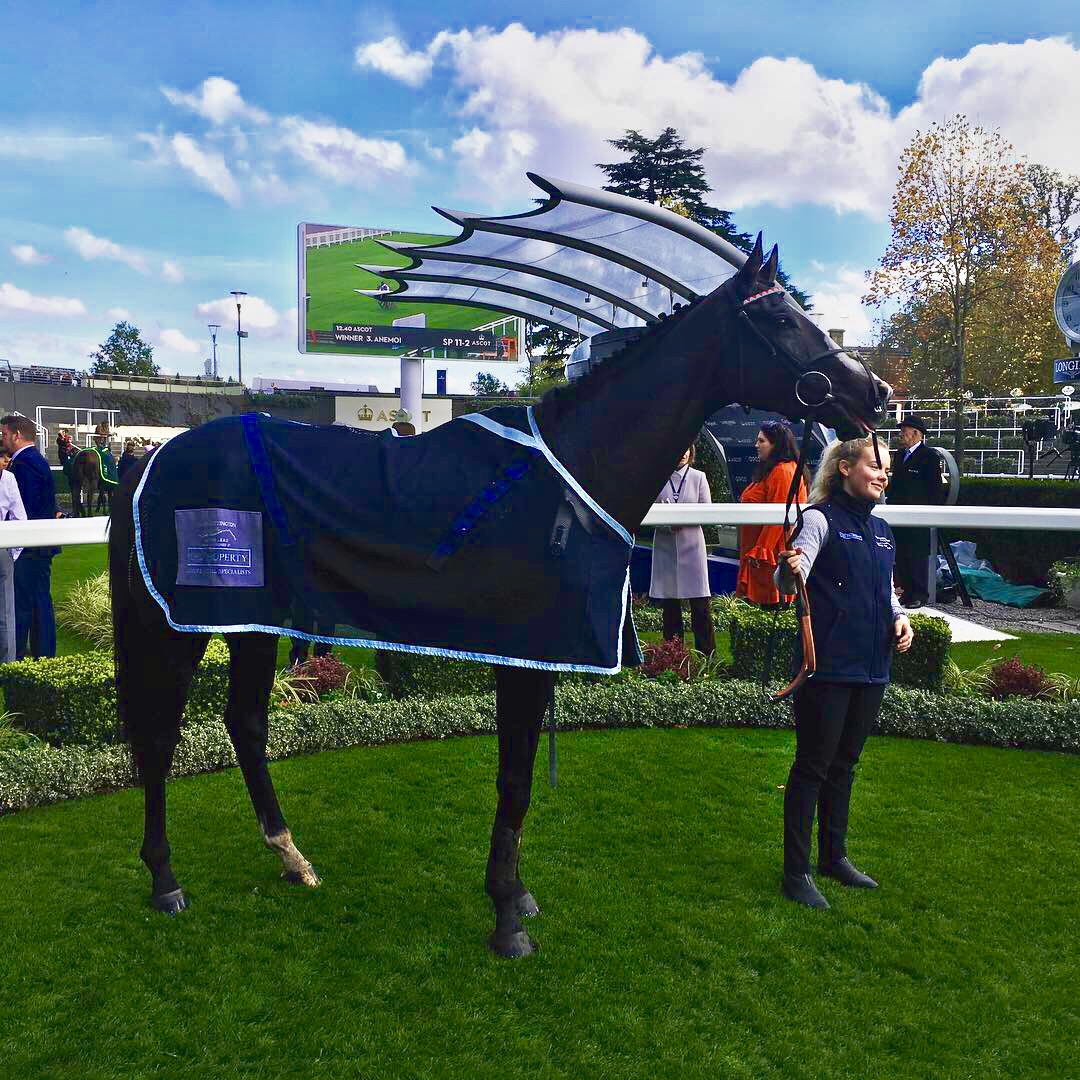 REPORTS ANEMOI Anemoi got his hurdles career off to the perfect start with a win at Ascot on Saturday. He jumped off in mid division under jockey Gavin Sheehan and showed his lack of experience by running in snatches. He was very deliberate at his hurdles and turning out of Swinley Bottom he looked to be in a bit of trouble, but when he hit the rising ground and Gavin got after him he picked up well. He got upsides the long time leader Pym turning into the straight, produced his best two jumps at the last two obstacles and went away to win by just over 2 lengths. This was an exciting debut and there’s plenty of room for improvement. He’s got a very exciting career ahead of him. 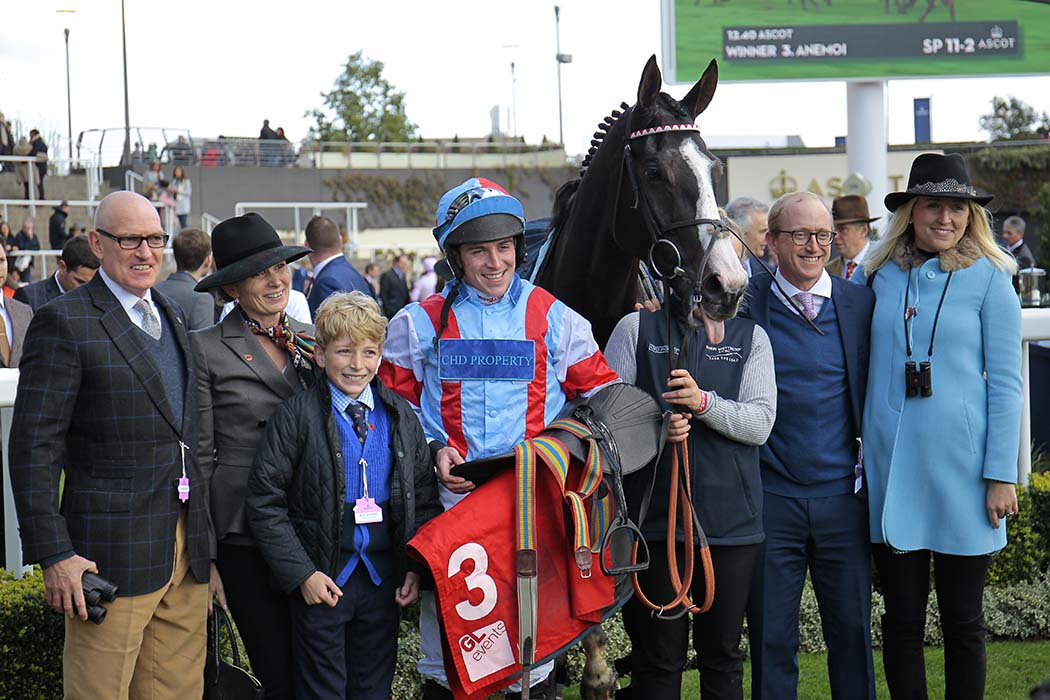 SIMPLY THE BETTS Simply The Betts finished 8th on his first try in a handicap at Ascot on Saturday.  The race was run at a strong pace and he settled well in mid division.  The race started to take shape on the far side where he came under pressure.  He didn’t find as much as expected and his run flattened out quickly, eventually coming home in 8th.  This run was along way below his best and we will be expecting much better next time. LANTIERN Lantiern ran a race full of promise to finish 5th on his bumper debut at Ascot on Saturday.  He was settled near the rear of the field by jockey Harry Bannister and relaxed nicely behind the slow pace.  The race turned into a bit of a sprint rounding the home bend and Lantiern managed to make up ground to get onto the heels of the leaders, but could never land a blow.  He went down by just the 4 and 3/4 lengths. This looked a pretty strong race on paper and he can only improve from here.  He’s a nice prospect. 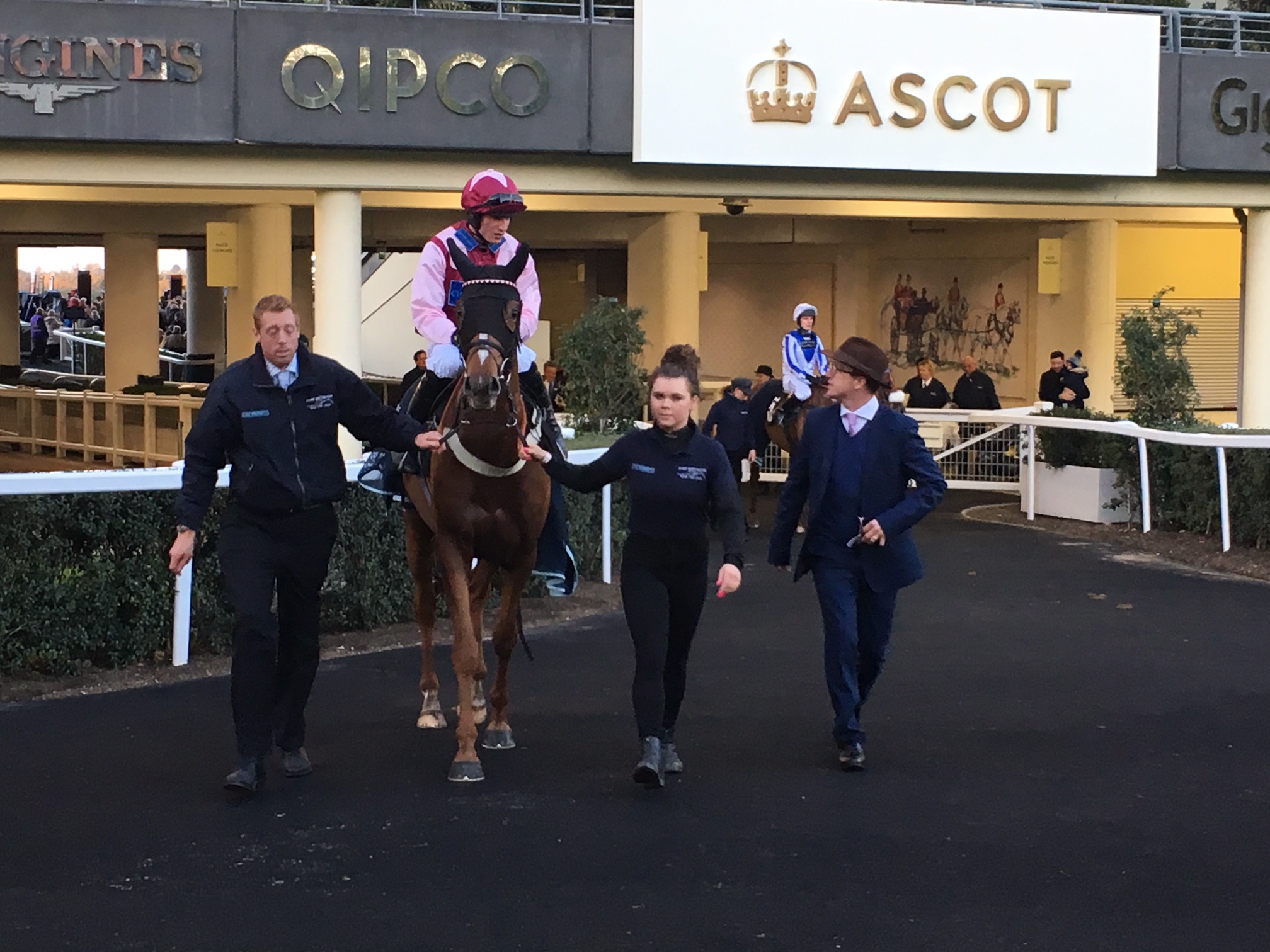 JAMMY GEORGE Jammy George finished 2nd on his first start for the yard at Chepstow on Wednesday.  He jumped off in the lead under Gavin Sheehan and was left to do his own thing.  He travelled and jumped well throughout the contest and turning in he looked to have every chance, jumped the second last in front only to be headed by The Big Bite coming down to the last.  He stuck on just to hold second from the closing Tedham.  This was a pleasing debut and he can only improve from here. THE DUBAI WAY The Dubai Way took a step in the right direction finishing 5th in a competitive Novices Handicap Chase at Chepstow on Wednesday.  It was a big field and plenty wanted to make the running so the pace was very strong.  He got shuffled back early on and like plenty of his rivals showed his lack of experience at his fences.  The race started to fall apart in front of him turning for home and he made headway to get upsides the leaders jumping 5 out.  His jumping was hit and miss over the last 5 fences but he stuck to his task well to finish 5th.  This was a step in the right direction and hopefully he can add to his 4 wins in the coming months. A LITTLE EARLY A Little Early finished 8th on his first bumper start at Chepstow yesterday.  He jumped off in a handy position under Gavin Sheehan and travelled well despite showing signs of greeness throughout the early stages.  The race took shape turning in and he couldn’t go with the leaders but stuck on well to finish 8th.  This looked a deep race and he stuck to his job well.  He will come on for the experience. GENIUS Genius finished 9th on his second bumper start at Newbury yesterday.  It was a strongly run race and Genius settled nicely in the rear.  He still showed signs of greeness running in snatches down the back, but travelled well enough to land a blow turning for home.  He picked up early in the straight but got a troubled passage at the 3 furlong pole which halted his momentum.  He never really got going again, eventually running on for 9th.  He showed plenty of pace at Southwell and the way the race panned out today blunted his speed.  He will now go hurdling. ENTRIES DJIN CONTI Djin Conti is set to make his return from a summer break at Warwick today.  He did well to win his second start for the yard at Wincanton back in May and is now set to go handicapping off a workable mark of 117.  His form doesn’t make him look particularly well treated, but he’s a young, unexposed horse who should have plenty of improvement in him.  Better ground is important to him. JUMBO DAVIS Jumbo Davis was entered at Warwick today but is set to wait for Southwell later in the month. She shaped well before tiring on the stiff Towcester hill back in the spring and has come back a stronger filly after a good break.  She's had her wind done and she is working nicely. Hopefully she can translate that to the track. INDIEBURG Indieburg is set to make his bumper debut in the coming days.  He holds entries at Aintree and Wincanton on Saturday, Sandown on Sunday and Taunton on Thursday.  He’s an athletic son of Sageburg, whose a half brother to a Grade 1 placed horse in France.  He’s been working nicely and is ready to make his debut, but he wouldn’t want the ground too soft. ROUGE VIF Rouge Vif has lots of hurdle entries this week and the first of them is at Wincanton on Saturday.  He ran well for a long way on testing ground at Newton Abbot last month before getting very tired and has come on for that run.  He was a bumper winner last year and if he can get back to that level he should be competitive.  He’s a big horse who wouldn’t want extreme ground either way. SAINT CALVADOS Saint Calvados is set to have his first start of the season at Naas tomorrow.  He missed this weeks Haldon Gold Cup due to quick ground and comes here looking for safe ground in preparation for the Tingle Creek.  He is a young improving horse who didn't run his race back in March in the Arkle at the Cheltenham Fesitval.  Hopefully he can get back on an upward curve here. THE GO TOU MAN The Go Tou Man has entries at Hereford on Tuesday and Ayr on Wednesday where he is set to make his third start of the season.  He ran a much better race when finishing 2nd at Southwell last time out, he’s progressing with experience and we are expecting an improved run from him.  Better ground is important to him and granted some luck he won’t be far away wherever he goes. HURRICANE LIL Hurricane Lil is set to have her next start at Kempton on Wednesday.  She was running a decent race before getting hampered from a bad draw at the track last time and now drops in class.  She’s shown glimpses of ability but is yet to get her head in front, she may need things to fall her way but granted a fair draw everything should be in her favour here. 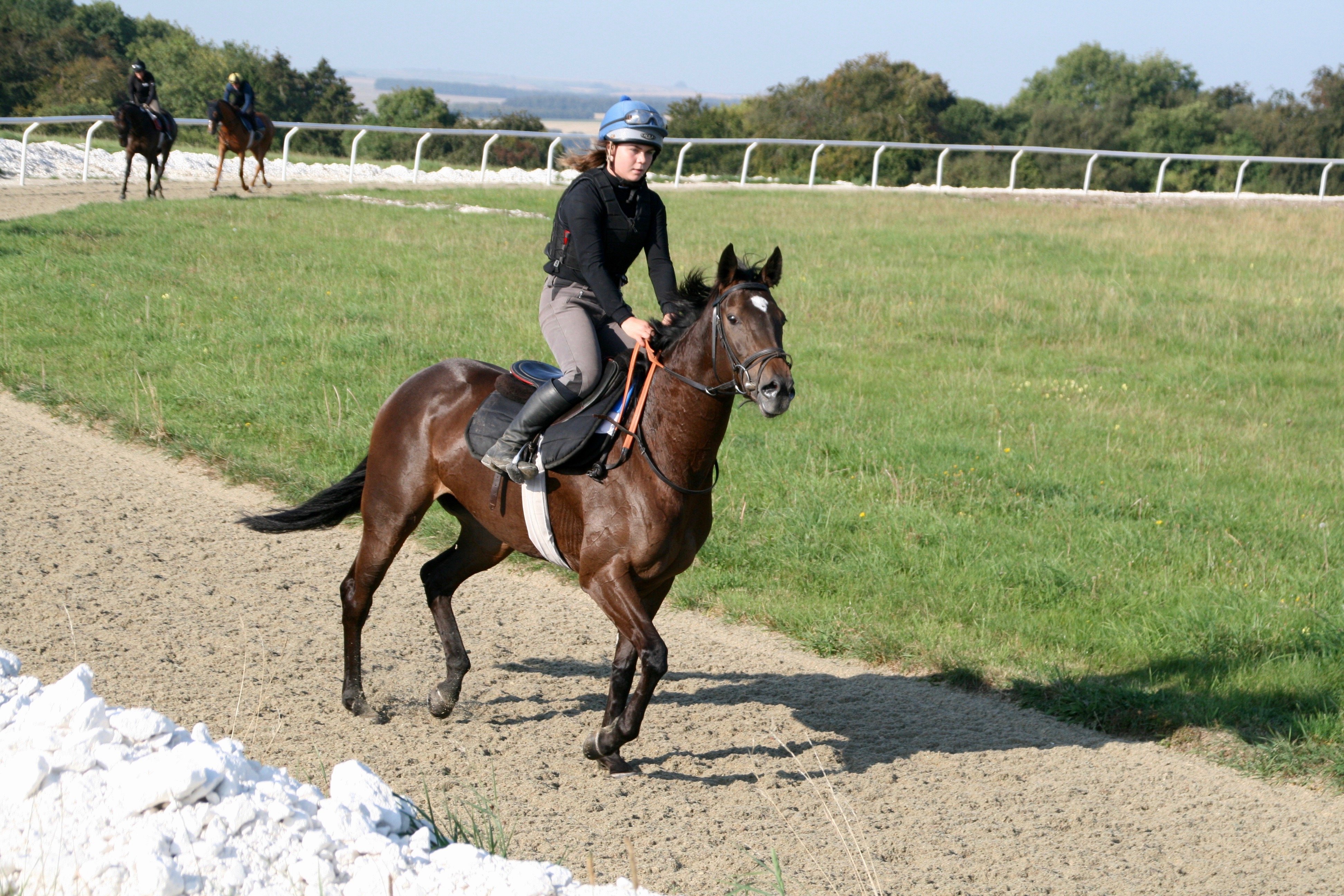 PERFECT MYTH Perfect Myth is set to make her flat handicap debut at Kempton on Wednesday.  She ran a much better race at Pontefract last month and now steps into handicap company off a mark of 55.  She likes to be held up, so the way races pan out around Kempton should suit her better than Chelmsford did.  Hopefully she can run well.