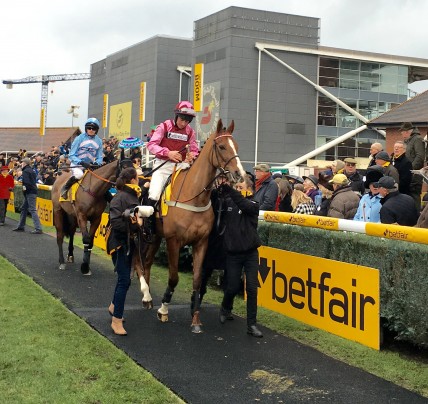 NEWS: The Betfair Hurdle wasn’t to be on Saturday due to another false start, but Affaire D’Honneur ran a blinder to finish 4th   nonetheless. He showed lots of talent and will likely take the same route as Arzal did last year, running in the Imperial Cup next at Sandown. Granted some luck we hope he will run a big race and will again be strongly fancied. REPORTS: AFFAIRED'HONNEUR finished an unlucky 4th in the Betfair Hurdle at Newbury on Saturday. He lined up in a good position for the initial start but unfortunately the starter called them back. This lead to the standing tape start and as it flashed across to let them go, Affaire reared up at the tape and gave the field 10 lengths. The race was run at a steady pace which made it even harder for Affaire to close from the back. As they turned into the home straight he was a good 30 lengths off the leaders. His jumping was slick all the way around and he stayed on really strongly, passing tired horses to just grab 4th on the line. Agrapart was an impressive winner but who knows what would have happened if Affaire D’Honneur had got an even start. The handicapper has raised him 1lb to 133 which we feel makes him well handicapped! PATRONNE was the first of 2 runners we sent out at Plumpton on Monday. She was pulled up after the 3rd last but she showed a lot of talent on her first run for us, she travelled strongly showing lots of speed and jumped well, leading the field for the majority of the contest. Gavin pulled her up quite quickly on the bottom bend, as she went from cruising to tiring in a matter of strides. We had her scoped post race and she was found to have lots of mucus in her lungs which is the reason for her not finishing out her race. We will get her right before finding a suitable opportunity for her again, her work at home has been excellent so we are confident she will bounce back in no time. PASSINGDUMOULIN was our other runner on the day making his first racecourse appearance. He finished a well held 4th on very testing ground and having started off in the middle of the pack, he showed his lack of experience from an early stage. Gavin had to get after him from time to time just to keep his mind on the job and a 5 runner field made it difficult to get him to learn anything. He is a big horse that has done a lot of growing which meant he struggled to cope with testing conditions, the experience will do him good but he will need to improve and show more next time. ENTRIES: BIGSOCIETY has been declared to run at Ffos Las tomorrow in a 3m Handicap Chase at 3.45 .  He was pulled up at Wincanton last time out but had shown good form on his previous two runs. We are hopeful the switch back to a more galloping track on very testing ground will suit Big S, if the meeting beats the weather which looks unlikely. He has hunted 4 or 5 times since his last run and he remains in good form at home, so if he’s on a going day we hope he’d be competitive. It is a competitive race for the class and David Bass rides for the first time. FOUROVAKIND holds 3 entries next week with the first of those being Lingfield on Monday which is now abandoned. The race would have been ideal if it was on but the track is already waterlogged in places which has meant they have called it off. He will also hold entries at Warwick and also the Devon National at Exeter on Friday. Fourovakind has been dropped to a mark of 124 and is in superb form at home. He improved from run to run last season, so hopefully he can do the same again and we can't wait to get him out! ZEPHYROSBLEU will now run at Wetherby on Tuesday at 4.25  due to Lingfield being abandoned. He ran very well at Wincanton on his last start finishing 2nd on handicap debut, but has been raised 6lb to a mark of 113 for his troubles. We have been able to drop him slightly in class here though from a 0-125 to a 0-115. The track and trip should really suit Zephyr and we are looking forward to seeing him out again. He is progressing nicely and we are very hopeful he can take another step forward. Everything he does this season is a stepping stone to a chasing career next year. Until later in the week,