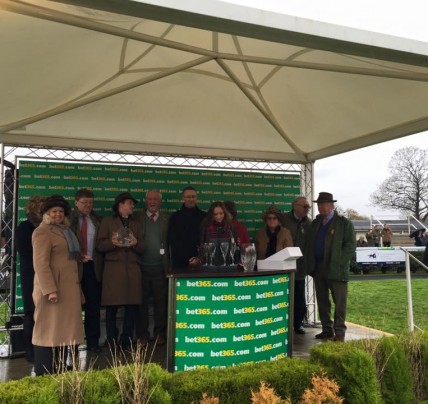 A winner at Newbury on Hennessy day, it doesn't come much better! REPORT: ARZAL has burst into the Arkle picture with an extremely impressive victory in the Fulke Walwyn Trophy at Newbury on Saturday!! There were lots of pace horses that like to front run, but from an early stage it was clear none of them were capable of being able to lay up with Arzal. He was very quick at his fences under jockey Gavin Sheehan, taking the rest of the field out of their comfort zone. Pundits had been critical of his jumping at Ludlow but he was a different animal on Saturday, a huge jump at the cross fence (5 from home) took him into a clear lead. Gavin kicked on from the home turn and Arzal responded for him quickening up the home straight in frightening fashion. Slick jumps at the 4 in the home straight left him about 20 lengths clear in the run in so Gavin eased right down to win by 13 lengths. He has always been a very talented horse, but fences have been the making of him. He is clearly a very smart Novice Chaser and will now step up in Grade. The Wayward Lad Grade 2 at Kempton at the King George meeting may be the next time we see him, he received a Racing Post rating of 158 which is right out of the top drawer. ENTRIES: FRIZZO has been declared to run tomorrow in the - 12.45 at Southwell. He ran very well on yard debut at Fontwell to finish 2nd, where he jumped excellently before getting outstayed in the run-in. He has come on for the run and is in good form at home, so we are hopeful he will be right in the mix off a mark of 114 and slightly back in trip. He only faces 6 rivals but the field is competitive, with last year’s winner Ballymoat declared along with last time out winner Bobble Boru. Paul claims his valuable 7lbs again, so let’s hope The Frizz can keep the successful run going. The only other entry we have this week is QASSER who is entered in a 0-130 Handicap Hurdle at Huntingdon on Sunday over 2 miles at 1.25 . He was hugely impressive at Taunton the last day and looked to stay the trip better than last year. He is up in class here but he has lots of speed and should cope with the stronger pace of the race. Qasser was also carrying enough condition at Taunton and has looked to tighten up for the run. We are hopeful he can run well up in class and progress through the season. NEW RECRUITS: We are very pleased to announce that we have some new recruits to Hill Barn; AffaireD'Honneur- A 4yo Shirocco gelding who has placed on both his starts over hurdles in France showing a lot of class on both occasions. He is also a half brother to this year’s French Oaks 2nd - Physiocrate so is very stoutly bred. A very smart recruit to the yard and we can’t wait to get him out over hurdles. PATRONNE -  a 3yo Solon filly who has won once in 5 starts in France. She was very impressive winning her maiden and she has size, scope and lots of quality and you could definitely see her jumping a fence one day. FATCATINTHEHAT - a 6yo Authorized gelding who was once rated 139 for Willie Mullins. He has had some time off, but joins us on a mark of 123. He is working nicely at home and should be out around mid December. We have also recently purchased an unnamed 3 yo Gelding by Getaway from the Cheltenham breeze up. He is a very athletic, strong model who has just started steady cantering this week and has a fantastic attitude. Until next week,