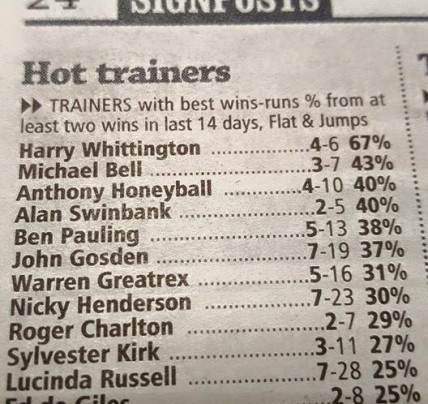 Big Society gave the newly formed Hill Barn Racing Club it's first ever winner, from only it's 3rd attempt at Chepstow on Wednesday!!! This win took the yards total to 11 wins from just the 32 runs, at an impressive 34% strike rate! We couldn’t be happier with the way the season is progressing, so long may the successes continue. REPORTS: BIGSOCIETY got off the mark over fences on his 2nd start for HWR at Chepstow on Wednesday. He was slow to jump off and was all but detached for the first circuit and a half, racing very lazily for jockey Gavin Sheehan. Gavin didn’t panic and just kidded him through the race before moving him into contention down the back straight on the final circuit. When Big S met the rising ground and started to pass weakening rivals, he started to travel strongly for Gavin cruising smoothly into contention turning for home. The Stuart Edmunds trained Smart Exit kicked clear at 4 out but Gavin always looked confident, closing down the leader coming to the last. Big Society produced his best jump of the day and lengthened away to win by 2 and 3/4L. The horse was on a good mark going into the race, but had some major questions to answer after his disappointing yard debut at Exeter. He received one of the best rides you will see from Gavin, who was incredibly patient on him. Big Society should take some confidence from his win and we are hopeful he can progress from here. The other runner of the week was ISLADIMILANO , who finished 8th on his hurdles debut in a hot Novice Hurdle at Market Rasen on Thursday. Everything happened a bit quickly for Isla on the day, he jumped well on the whole but he found the pace of the race just far to quick for him. He is a 4yo and is very backward mentally. He is a horse who needs to gain a lot more experience to sharpen him up, before stepping up in distance but it's evident from this run that will take a long time. ENTRIES: POLSTAR has been declared to run at Kempton today in a 2m Conditional Jockeys Handicap Hurdle at 3.45. He has been an absolute star this year winning 3 times from 9 starts. He won under an inspired ride from Paul the last day and the handicapper had his say raising him 9lb to a career high of 119. This will be the most competitive race he’s run in and the ground may well be a little soft for him, but he goes there in excellent form and the track should suit. If he can produce his best form he should be competitive here before going out for a well earned break. FOUROVAKIND is set to make his seasonal reappearance at Lingfield tomorrow in a 3m Handicap Chase at 3.00 . He progressed nicely over fences last year, winning at Chepstow impressively in January before placing at Newbury and Haydock up in class. He is a bit of a Chepstow specialist so the dream would be to win here and give him every chance of getting into the Welsh National. He returns on a mark of 127 which we feel is very workable and the track and the ground should be ideal, we are very hopeful he can be in the mix in quite a competitive race at the entry stage. Duke of Medina, Bigmartre and Arzal hold multiple entries over the next week, we will update for part 2 of the weekly email when plans are confirmed. We will also be reporting information about our 3 new recent purchases from Cheltenham and Deauville sales. Until then,