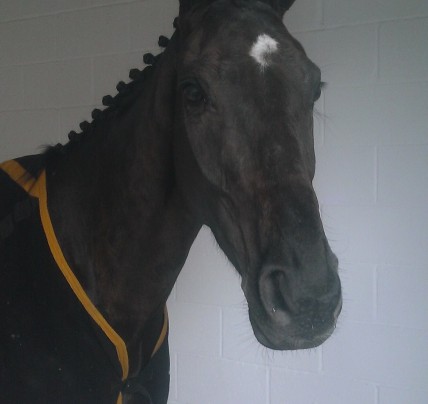 It's been a busy week training 26 horses whilst getting engaged(!) as well as gearing up for the Lambourn Open Day on Friday... For those of you who would like come and visit (the more the merrier - all welcome!) we are open from 8.30am until lunchtime. Last week saw Hill Barn send out its first Cheltenham Festival runner - Duke of Medina in the Fred Winter. He finished down the field in an ultra-competitive renewal, he has been a star this season however and it was amazing for us to have our first runner on the biggest stage! Hopefully the first of many!!! ENTRIES: Hoke Colburn makes his debut at Warwick today in the bumper that ends the card. He was bought from Goffs in May and has been coming along nicely and is now ready to step foot onto the track. He is a tough hardy sort and a nice mover, hence the reason we have been waiting for some better ground. He will take on a couple of horses with strong point to point form today, amongst other newcomers with varying levels of ability. Hopefully he can shape nicely and we can learn plenty from the experience. Emerging Force is an intended runner Challenger Stayers Hurdle Final at Haydock on Saturday. He showed a great attitude to get up in the dying strides to win at Doncaster in a qualifier for this race and has been freshened up with the final in mind. He has gone up 12lb for his win but the front 2 pulled a long way clear, so it’s understandable. He is still very lightly raced and developing all the time, so there should definitely be more to come from him. It is a 50k race and being a qualifier winner he is eligible for the bonus. Hopefully he can go close in a competitive field. REPORTS: Duke of Medina finished 14th in the Fred Winter Handicap Hurdle at Cheltenham on Wednesday. He jumped off handy under jockey Gavin Sheehan but there was a ferocious pace and they soon found themselves shuffled back to mid field. As the race developed Duke couldn’t go the gallop on this quicker ground and could only plug on in mid field. He has been dropped 4lb to 134 after that and will now been aimed at one of the Juvenile Handicap Hurdles at Ascot or Newbury. Duke has been a star this season!! Qasser finished an excellent 3rd at Fakenham on Friday. He was wiped out at the standing start and found himself much further back than ideal. He travelled well throughout the race under jockey Gavin Sheehan and picked off rivals as the race developed. He cruised up into contention but the winner got away from him turning for home and Qassers run just flattened out a bit, eventually finishing 3rd. It was a cracking run considering the start and the ground was probably a bit tacky for him. We will keep him going over hurdles on his favoured better ground. Fourovakind was pulled up in the Midlands National on Saturday. Gavin jumped him off in a nice position fairly handy on the inside and he travelled and jumped nicely for the first circuit. There was a stupidly strong gallop thanks to the hard Pulling Red Devil Lads and this took lots of the field out of their comfort zone. As they went onto the final circuit Fourovakind started to weaken and was pulled up. The ground was a bit quick for him on the day and we may well struggle to find another race for him due to the ground drying. He has been brilliant this season taking connections to the big days and winning the Devon National. Bigmartre unfortunately missed the cut for the County Hurdle on Friday, so he rerouted and finished a solid 3rd at Fontwell on Saturday. Ciaran Gethings took the ride and the pair reverted to front running tactics. Unfortunately two others in the field also wanted to make the running and this led to a very strong gallop. Bigm jumped and travelled really well on the quickest ground he’d encountered, as they turned out on the far side he fought off the other two front runners. He was vulnerable to something that had been held up, the eventual 1st and 2nd swooped past him but he showed a really willing attitude to battle on up the run in for 3rd. He will now be aimed at the boy’s race at the Aintree Festival. Big Society ran a solid race at Ffos Las on Sunday before being pulled up. He jumped off in mid field and travelled pretty well on this better ground, his jumping has improved from race to race and he was certainly better again on the day. Gavin had squeeze him along from time to time but every time he asked Big S responded.  They moved into contention turning out down the back for the final time but the leaders then quickened to pace up. He couldn’t go with them and was eventually pulled up on ground that was too quick for him. Hopefully we get some rain and can find another suitable race for him. Until next week,