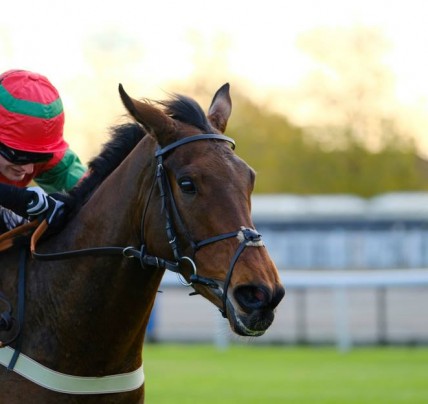 THIS WEEK We kicked off the week well with an eye-catching performance from Eyesopenwideawake who made all to win on chase debut at Kempton on Monday, another exciting prospect to keep an eye on.  So as we motor through November the second Cheltenham meeting for the new season starts today.  We'll be there racing each day as well as out and about at the sale tonight.  The nights are closing in and we can feel the buzz of the National Hunt season really getting going...   REPORTS Eyesopenwideawake produced an exceptional display of jumping, to win on chase debut at Kempton on Monday.  There was meant to be lots of pace on, but nothing could go with eyes over the first 3 fences and this strung the field out over almost 30 lengths.  His jumping was foot perfect throughout the contest and although he set a strong pace Harry was able to get a breather into him on the far side.  The pair kicked for home turning in and kept picking up all the way up the home straight, winged the last and went away again to win by just over a length.  This was an exciting and very likeable chase debut and there's plenty more to come from him.   The Go Tou Man finished 4th on his second start at Fontwell on Friday.  It was a strongly run race from flag fall and he went through the first part of the race well.  He showed signs of greenness coming past the stables for the first time and going away from the stands more pace was injected.  This rushed him off his feet, but to the horses credit he stuck on all the way home to finish 4th.  This was run in a very different fashion to his debut and it showed his inexperience.  He will now go hurdling and should continue to improve with racing and a trip.   Taras Day shaped nicely before getting tired at Warwick last Friday.  She jumped off in mid division under Richard Johnson and traveled strongly early on.  She was still in the shake up coming down the hill, but when the leaders quickened her run flattened out, eventually plugging on to finish 10th.  Richard felt she ran off her nerves early and that told late on.  She will now be schooled over hurdles.   Salto Chisco ran another cracker to finish 4th at Kempton on Monday.  He was ridden closer to the pace than normal and this lit him up.  He jumped very well throughout and turned into the straight going as well as anything, but couldn't pick up as well as the leaders.  He eventually came home in 4th.  He ran another consistent race and now goes for a well deserved winter break.  He's been a star for us winning 3 this year and will be seen again in the spring.   Tangoed ran with credit in a hot race at Ludlow yesterday.  The fillies and mares maiden hurdles are very competitive at the moment and this was no different.  They went very quick from flag fall and that put her jumping under pressure.  The race settled down turning away from the stands and she got into a much better rhythm.  She was outpaced turning in but stuck on well up the home straight.  The softer ground wasn't an issue for her and she will appreciate a step up in trip going forward.   ENTRIES Glenmona is set to step up to listed class in the Mares only bumper at Cheltenham tomorrow.  She ran a big race on debut, around a track that was too sharp for her and has since progressed at home for that experience.  The more galloping track and stiff finish should suit her and we are hopeful of an improved performance.  This is a competitive race but we are hopeful she possesses the class to be competitive.   The Dubai Way holds multiple entries in the coming days to make his hurdling debut.  He showed a good attitude when knuckling down to win his bumper on stable debut and is now ready to go hurdling.  He has schooled nicely and should be competitive in novice hurdles.  He is one we are looking forward to.   Tierra Verde is set to make her 3rd bumper start at Southwell on Tuesday.  She ran with credit on both bumper starts last season and has strengthened up for her summer break.  Granted some cut in the ground she should be very competitive here.  She is a mare with a cracking attitude and we are looking forward to seeing her out again.   Hoke Colburn is set to have his second start of the season at Southwell on Tuesday.  He pulled up last time out, but has been in good form since.  He's ready to go again and will appreciate the drop in class.  The return to Southwell should help and although 2 and a half miles is on the sharp side for him, he should run well.  He is attractively handicapped on his best form.   Vinnie Lewis holds an entry at Chepstow on Wednesday.  He got too far back at the track last time out and showed a great attitude up the straight to finish in the shake up.  The ground was quick enough for him that day, so granted some more ease under foot and a more prominent ride we should see an improved performance.  If he doesn't run here, he has a race at Sedgefield the following week.  He remains in great form at home.   Fou et Sage holds an entry at Wincanton on Thursday.  He ran a big race from off the pace at Ascot and has been dropped to a mark of 128 which is very workable.  This is a step up in trip which could suit him and it's also a drop in class.  He has come out of Ascot well and deserves to get his head in front.  If this comes too soon, he has other options in the coming weeks.