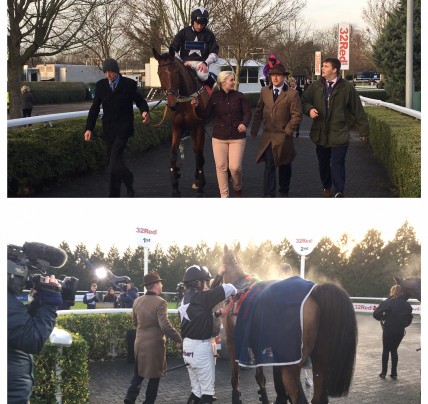 FESTIVE SUCCESS – A GREAT COME BACK FOR BIGMARTRE

THIS WEEK We hope you all had a lovely Christmas. Our festive spirits have stayed well and truly lifted with another winner from our one runner to report so far this week.  Meanwhile the racing club's Tutchec has been enjoying a good bit of festive hunting and the new barn is looking ever closer towards completion.  So as we sore into the New Year things are looking up... REPORTS Bigmartre got his season off to the best possible start, with a pillar to post victory at Kempton on Tuesday.  He made the running and got into a lovely jumping rhythm under jockey Jerry McGrath.   The pair set a good pace throughout the contest and when the race started to develop coming to 2 out, much of the field remained in contention.  BigM went a length down coming to the last hurdle, but he produced an electric jump and stayed on powerfully to win by a length.  It was a cracking return and he is an improved horse, both mentally and physically from last season.  The plan going forward is to keep him fresh for a tilt at the Martin Pipe Conditional Jockeys Handicap at the Cheltenham Festival. ENTRIES Peal of Bells has been declared to face 11 rivals at Taunton today.  She has been kindly leased to the racing club for the rest of the season by Elaine Holmes and we are looking forward to getting her started.  Although she was pulled up on her last 2 starts for her previous yard, at Uttoxeter in September she had shown that she could be very competitive off her current handicap mark.  She is a very genuine mare with a good attitude and we are looking forward to finding out some more about her. Fourovakind holds entries at Newbury and Exeter over the coming days but the current plan is to run at Exeter on New Year’s Day.  Although the original plan was to run in the Mandarin Chase at Newbury, drying ground has meant that we have had to reroute to Exeter, where the ground is easier.  He ran very well for a long way at Lingfield on his comeback this season, and we are looking forward to running him on a track he seems to really enjoy. Cristal De Sienne is set to make his second start under rules on the same card at Exeter.  He ran a huge race on racecourse debut at Newbury in November and has sharpened up for that experience.  The form has worked out well and we are hopeful he will be very competitive. Ruby Yeats has two entries in the coming week, the first of those being at Hereford on Wednesday.  She ran very green on stable debut at Southwell before coming home in impressive style to win.  She has sharpened up for the run and come out of the race fresh and well.  She should be very competitive under a penalty. Affaire D’Honneur is another with multiple entries in the next couple of weeks and, like Ruby Yeats, the first of those is at Hereford on Wednesday.  He has been freshened up since his run at Haydock in November and should appreciate the drop in class on a sounder surface.  He is a talented horse who is starting to look attractively handicapped. So all that's left to say is a big thank you to everyone for being such a great support throughout the year and we look forward to continuing onwards and upwards in 2017!