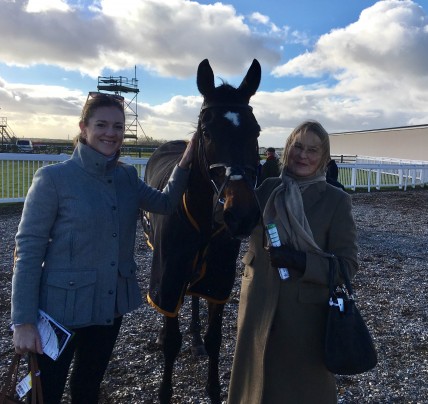 With the first frost falling over Hill Barn this week and at long last some proper winter rain, we've been able to get some more runners out on the track.  Activity around the yard is continuing to increase at a rapid rate and we're delighted to announce the ground works and footings for the new barn are well under way with the structure set to arrive soon...

Ahraam finished 4th at Warwick on Friday.  It was his 3rd start over hurdles and the first time they went an end to end gallop from the outset.  He sat third from flag fall but unfortunately got a heavy bump at the first hurdle.  This made him quite keen and that coupled with strong pace meant he didn’t jump as well as we know he can.  He was still in contention coming in to the fourth last but a mistake at that obstacle ended any chance he had.  Gavin got him back on an even keel and brought him home in 4th.  The stronger pace brought Ahraam’s stamina into question, so we will take him back to the flat.

Vinnie Lewis ran a race full of promise to finish 7th in a competitive contest at Ffos Las on Sunday.  The course did an excellent job in producing safe jumping ground, but this meant that the race was more competitive than we’d have expected at entry stage.  He made the running under jockey Tom Cannon and put in an excellent display of jumping, meeting every obstacle spot on.  Vinnie Led the field to the 3rd last obstacle but wasn’t able to quicken like a couple of his rivals.  He was hampered by a faller at the 2nd last which cost him a position or 2, he then stayed on nicely all the way to the line.  We will look for another novice hurdle over this trip before stepping up to 3m later in the season.

Guiding Stars had his racecourse debut at Huntingdon on Tuesday.  He had been showing us plenty of ability at home having only been broken in back in June.  It was a messy run race where they went a crawl and it turned into a sprint which didn’t suit.  Guiding Stars found himself trapped on the inside with nowhere to go and having been very green through the early stages, galloped through to be beaten the same distance as when they sprinted for home.  He is a very nice horse and will only benefit from the experience and with more work on the grass gallops at home he will be a different horse next time.

Blandfords Gunner is set to make his debut for the yard at Wetherby tomorrow.  He is a big athletic chasing type, who has only had 10 starts under rules and joined the team this autumn.  He is fairly versatile when it comes to going but wouldn’t want extremes and is an excellent jumper.  Gunner has won over 2m but we are starting over 2m3f to try and learn some more about him.  He is a lightly raced 7yo who should have more to come.  He’s an exciting addition to the team and we look forward to getting him out on the track.

Affaire D’Honneur is entered at Cheltenham tomorrow but also holds an entry at Haydock the following week.  The slow pace at Fontwell last time out didn’t show him in his best light and a switch to a strongly run handicap should really suit, as should the step up in trip.  He showed last season that he can go well in these sort of races and he should be competitive wherever he goes off a mark of 128. The recent rain will also suit him.

Tutchec is set to make his debut for The Harry Whittington Racing Club at Fontwell on Sunday.  He has been in great form since joining us in the summer and his schooling has gone very well.  The figure of 8 chase course will be something new to him but we think it will really suit him and the rain has come at the right time.  This trip may be short of his optimum but it will be nice to get him out and learn some more about him.  He is very well handicapped on some of his best form.

Sunday Royal is set to make his hurdles debut at either Plumpton or Chepstow next week.  He had some solid form for Harry Dunlop on the flat, reaching a peak rating of 75.  He stays up to 2m on the level but has been competitive over shorter trips, so we will start him off over 2m initially.  His schooling has gone well and we can’t wait to get him started.  He handles ease in the ground well.

Farbreaga is set to make his seasonal reappearance at Chepstow on Wednesday.  He wasn’t at his best in his two starts for the yard last season but has come back from his summer break in much better form.  It will be his first start at Chepstow and the track should play to his strengths.  He is versatile ground wise and has fallen to a mark of 118 which is 8lb lower than his last win.  Hopefully he can produce a good performance and be competitive.

Katarrhini is also set to run at Chepstow on Wednesday.  She is entered in a 2m mares only handicap hurdle and should be suited by the easier ground.  Her schooling and work has gone well, so hopefully she can get competitive off a mark of 81. We had considered going chasing with her but there wasn’t a suitable race for the moment.

We're delighted to announce our beloved stable star of last season, Arzal who as you all know is sadly nolonger with us, has been nominated for a prestigious award at the ROA Horseracing Awards 2016 - "The Racing Breaks Outstanding Novice Chaser" alongside other nominees such as Douvan and Rule The World.

So we ask you all kindly to please support and join the voting.  To do so just click on the link below: