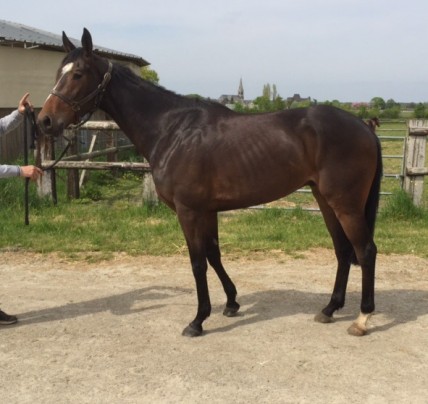 Hoke gets HWR off to a flyer

Hoke Colburn got the 2016/17 national hunt season off to a flying start with a win at Southwell last Tuesday. It was an excellent front running ride from yard conditional Harry Teal, it was also Harry's first win for the yard so gave us all a great thrill. He is a talented young rider and works extremely hard so it couldn't have been more deserved. The Starlight children's charity race day at Newbury on Friday was a huge success, we managed to raise just under £3k which comfortably beat the target. A huge thank you to everyone who donated and we thoroughly enjoyed reading everyone's comments. The trainer definitely needs to stick to the day job though - having thought the field had gone too quick in the early stages he sat last on Qasser. Turning into the home straight it looked for all money that Qasser would do an Arazi, pass the whole field and bolt up by 10 lengths. Sadly on this occasion it wasn't to be and with a very tired pilot in the closing stages, Qasser could only manage 6th of 8. All for a great cause though and the jockey/trainer and Owners all had a fantastic day out. We have had a very busy week at the DBS Spring sales where we successfully sold Qasser, Big Society and Frizzo. We also bought three new horses including - a 3yo Store Horse by September Storm, a 4yo Irish point to point horse named Flower Ball who is by Ballingarry, and finally a120 rated 6 yo hurdler for the Hill Barn Racing Club named Octagon. Also great news this week we secured a 4 yo AQPS bumper winner from France by Ballingarry for the Hennessey Six. He was 2nd on his debut beaten a neck where the form has worked out very well. He was extremely impressive to win on his second start showing an electric turn of foot. Exciting times for the season ahead of us!! REPORTS: HOKECOLBURN won in excellent fashion at Southwell on Tuesday last week. The form of his Warwick run was working out nicely and we were hopeful this race was a good opportunity to get his head in front. There was no pace in the race so we decided to make the running on Hoke, so Harry popped him out in front and dictated a steady pace from flag fall. As the field went down the far side for the final time Harry increased the tempo and the pair quickened up into the home straight, showing a very good turn of foot to go 5 lengths clear. Just the one challenger appeared out of the pack in the form of the Charlie Longsdon trained Mariah’s Legend, but Hoke held her off and they finished well clear of the rest. We are delighted with the win and Harry gave him an excellent ride, he will now have his Summer break before going novice hurdling in the Autumn. POLSTAR finished a well held 6th on his trip up to Perth last Thursday. The race ended up being a smaller field than expected and the pace wasn’t as strong as Polst needed it to be. Gavin jumped him off in a handy position and they crawled for the first few furlongs. As they quickened it up down the back straight he got outpaced and lost ground. Polst wasn’t able to make that ground back up, eventually coming home in 6th. He needs a strong pace to be seen at his best. ENTRIES: MOLLASSES has been declared to run at Stratford today at 7.05. She was disappointing at Leicester last time out, but was later found to be in season. She has been training well since and goes back over hurdles under Nico de Boinville who takes the ride. It is a competitive race but off her current rating she has to run in this class of race, this will only be her 5th start over hurdles. Hopefully she can run a big race and take a step back in the right direction. Polstar will hold entries at Southwell and Ffos Las next week, it is too early to say where he’s going but hopefully we can find a race with a nice strong pace for him to run at. Flat tracks and a collapsing pace is what he needs and if granted this he should be able to run a big race. Harry Teal will now most likely take the ride.