Since our usual early January quiet spell things have started to pick up a little with more runners.  Frustratingly we seem to be suffering from a serious case of seconditits at the moment, with multiple close finishes just sadly not going our way!  So we'll keep kicking till we cross the line with our heads in front... 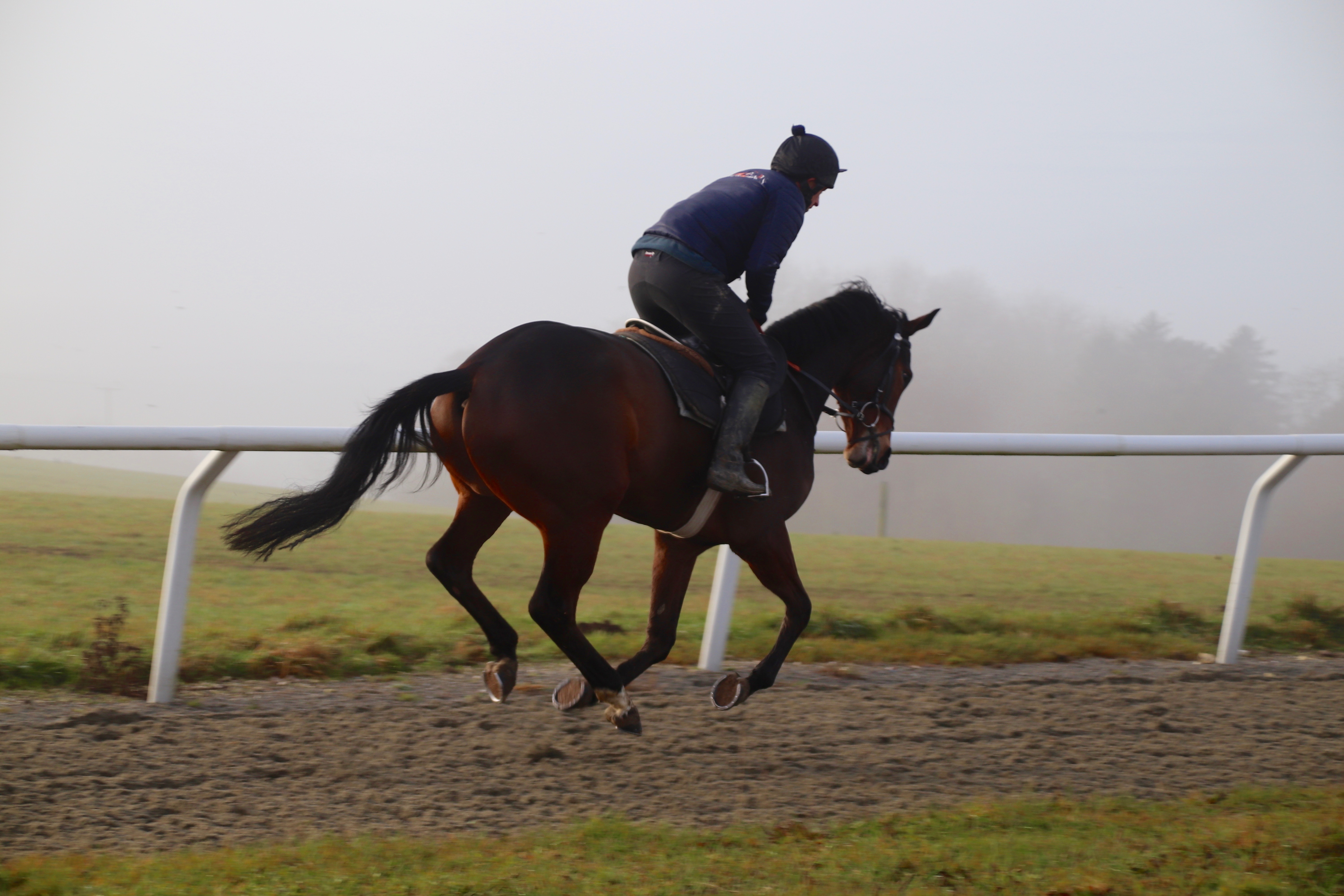 Shaffire Shaffire lined up for her 3rd run in a month at Lingfield on Saturday 11th January.  It was a race that looked a good opportunity for her on paper, so we thought we'd give it a go.  She jumped out of the stalls and settled in a good position just behind the pace.  When they quickened up she got caught one paced, but once she got going under Nicola Currie’s urgings she flew home to just get beaten a nose.  It was agonisingly close and Nicola advised that a longer straight would suit her better.  There are a couple of options for her at Kempton in February and so that is where we will head next. SHE'SONEOFOUROWN Later that day She’soneofourown made her debut in the fillies bumper at Wetherby.  She has speed in her pedigree, so therefore we felt that she might just be able to start off over this trip.  And she had shown ability at home however we felt that she would come on for the experience. There wasn’t much pace in the race but she settled in a very nice position.  Turning in she looked a bit one paced with the eventual winner quickening past her, but she galloped and stayed on well to finish a solid second. She would have learned plenty from the experience and should improve for a step up to 2 miles. So we will freshen her up and aim to run her again around late February. BLACK ABBEY Black Abbey made his second start over hurdles at Newcastle on Monday.  Having shaped with plenty of promise on his debut over hurdles he went off favourite on this occasion.  It looked a very good opportunity on paper so we were hopeful of a big run.  Jockey Gavin Sheehan managed to nick a lead at the start where he went to try and steal it from the front.  Turning in he had every chance but was getting stuck in the gluey ground. He was staying on well but due to the very dead ground he just got beat a length in second. He's been very close on both starts so far so hopefully he can pick up a race of this nature before too long.   ENTRIES LANTIERN Lantiern has been declared to run in the Handicap Hurdle over 2m4f at Huntingdon today.  This will be his first run since having a wind operation in December.  Before that he was last seen going extremely well at Warwick before making a noise and being pulled up. He is a horse we have always liked at home and after his previous wind operation he improved considerably to win two races. The race looks a reasonable opportunity and hopefully he will improve for the step up in trip.     CAPTAIN TOMMY Captain Tommy has also been declared to run at Huntingdon today, in the Pertemps Qualifier.  He hasn’t found it easy on his last 2 starts despite being in good form at home.  He has now dropped down the handicap to a reasonable mark and a change in tactics hopefully will mean he can bounce back to form.   SIMPLY THE BETTS Simply the Betts will line up in another novice handicap chase over 2m4f at Cheltenham tomorrow.  Back left handed but in a good race. He did plenty wrong at Kempton, most noticeably jumping left handed but stayed on well to finish second from a long way back.  He has a big engine and returning to a left handed track should suit him well, so we are hopeful of a big run. He has been to top event rider Laura Collet to tidy up his jumping recently, and so we are looking forward to running him.   PAT KELLY Pat Kelly will line up for his second hurdles run at Uttoxeter tomorrow.  After showing promise on debut, he will want a trip in time so the conditions will suit him well at Uttoexter and hopefully he can show some progression. He is very much a work in progress as he is still backward but has a great attitude. COURT LIABILITY Court Liability holds a number of entries in the coming week.  He has had as wind operation since his last run, so hopefully he can find some of his old form.  It will be a case of seeing how he runs before deciding whether he wants to be a racehorse still or not. STICK WITH BILL Stick With Bill also holds a number of entries next week and has been in good form at home.  He was meant to run on Tuesday at Leicester but the ground was frozen so the meeting was called off.  We will pick the best opportunity for him and hopefully he can run a big race under a penalty to give him a confidence booster. MR KATANGA Mr Katanga it set to make his debut in a novice hurdle next week at either Newcastle or Ffos Las.  He is a well-bred un-raced 6 year old who has shown some good work at home.  He has been well schooled and so knows his job and we are looking forward to seeing what he can do. He will love the very soft conditions and is a staying type for the future, so hopefully this race will suit him well. JAMMY GEORGE Jammy George is set to line up in another beginners chase at Ffos Las next week.  He has come out of the Newbury race last month in good order.  The race got his confidence back having fallen the time before and he has been schooling well since. He runs in this beginners chase on a track and in conditions that should suit him well. Hopefully he can take another step forward and show us he is a staying chaser for the future.