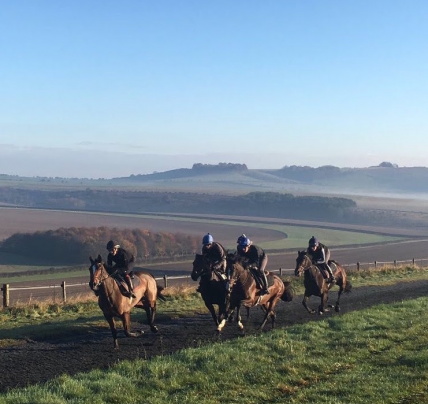 THIS WEEK   There was a great crowd down at Wincanton on Sunday to cheer on Harry and Salto Chisco who finished an admirable 3rd in the Key4Life Charity race.  We managed to not only reach but double our fundraising target, Harry had a great spin and it was all for a great cause, so we'd like to say a huge thank you to everyone who have so kindly donated.  Since then temperatures have began to drop this week since the clocks have now gone back, and we've bagged another winner notching up the yard's total training tally now to 60 career wins. Onwards and upwards to another big weekend ahead...   REPORTS   Vbadge Treat finished down the field at Aintree on Sunday.  It was a competitive race on paper, but she'd been showing all the right signs at home so we expected a big run.  She travelled well for much of the contest but when the race took shape turning in, she came off the bridle quickly and found very little for pressure.  It was a disappointing run but when we checked her over, she was found to have a wind problem.  That will be corrected before her next run and hopefully she can show herself in a much better light next time out.  She is talented.   Star Tackle shaped nicely before unseating his rider at Ayr on Monday.  He jumped off in mid division, but a huge jump at the first fence took him closer to the leader.  He got tight to the second fence, but got into a nice rhythm after that.  He cruised upsides the leader and was going very nicely on the final circuit, before making a mistake at the second fence down the back straight.  He got too tight and hit the fence, giving the jockey no chance of retaining the partnership.  It was a frustrating trip, but the horse showed he has plenty of ability as we have always believed he has.  He should gain compensation next time.   Vinnie Lewis ran another big race to finish 4th at Chepstow on Tuesday.  There was lots of pace on and they went very fast from flag fall.  Vinnie was taken off his feet early on but still produced an excellent jumping performance.  When the race took shape turning for home Vinnie picked up to get into contention and produced some great leaps in the straight.  Unfortunately he didn't have the required gear change to catch the leaders on this sort of ground.  He stuck on to finish 4th.  It was another cracking run, but the drying ground didn't suit.  Granted some soft ground, his turn won't be far away.  He has a cracking attitude. 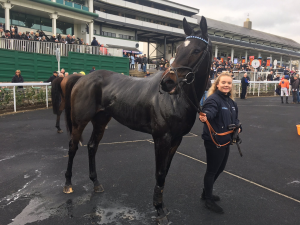 Court Liability made his hurdles debut a winning one, with a gutsy display at Sedgefield yesterday.  He was given a positive ride by jockey Harry Bannister and put in a solid round of jumping for his first try over hurdles.  The race started to take shape turning out of the back straight and when Harry asked him to go on, he picked up nicely.  He took a length or so out of the field and knuckled down from the back of 2 out, to win by a cosy length and a 1/4.  He showed a cracking attitude once again and can only improve from here.   ENTRIES   The Harry Whittington Racing Club's Tangoed is set to have her first hurdles start at Uttoxeter today.  She has run well to be placed in both her bumper starts for the yard and should improve for an obstacle.  Her schooling has gone well and although she is on the small side, she possesses plenty of scope.  We are starting at 2 miles, but she will stay further.  We are looking forward to getting her out again.   Simply The Betts is set to make his hurdle debut in the coming days and his first option is at Ascot tomorrow.  He showed lots of ability on debut and that race is working out nicely, with the 2nd winning easily over hurdles and the 5th running a huge race on hurdles debut to finish 2nd.  Schooling has gone well and although he will get a bit further in time, 2 miles looks a good starting point.  If he doesn't go to Ascot which looks unlikely at the moment, he has options at Chepstow, Newbury and Exeter next week.  He is a very exciting hurdling prospect.   Fou et Sage is set to have his next start at Ascot tomorrow.  He was caught out in a tactical race at Market Rasen first time out and has been dropped to a mark 131, which should help him get competitive.  He has come on for his last run and we are hopeful of an improved performance.  This looks a hot race, but hopefully he can be competitive.   Emerging Force is set to have his first start of the season at Ascot tomorrow.  He is 2 from 4 over fences and looks attractively handicapped off a mark of 139.  He has a great record fresh, he loves good ground and has the attributes to cope with a top handicap.  It is clearly a very competitive race, but we have always felt he is capable of winning in this grade.  This should also give us a good idea of where to go for the rest of the season.  Schooling has gone well and he's in excellent form.   Salto Chisco has been entered at Huntingdon on Sunday.  He ran well to finish 3rd in the charity race last Sunday on ground which wasn't ideal for him and he's since come out of the race fresh and well, so we have put him in this chase.  He is reasonably handicapped off a mark of 113 and should run well if he takes his chance.  He has been excellent this season winning twice and has earned his winter break.   Octagon holds multiple entries over the next couple of weeks and the first of those is at Southwell on Monday.  He showed up nicely on his only start for the yard last year, but suffered a setback and missed the rest of the campaign.  It's been a long road back and  hopefully he can reward his connections for the patience they've shown in him.