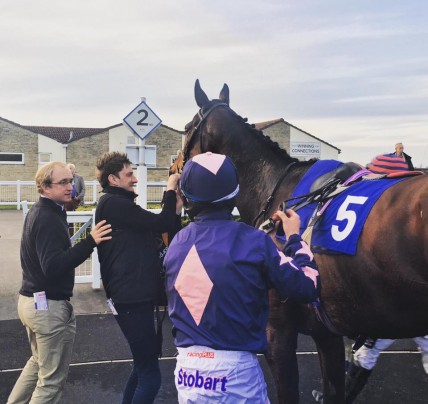 Patronne Gets the New Season Off To A Good Start

NEWS: Only 3 days to go until the inter stable charity flat race at Newbury Racecourse on Friday, we would like to thank all those of you that have sponsored the trainer on his mission to ride a 2nd career winner (first in a point to point in 1997 when all the other horses in the race ran out, him and his mount where the only finisher - a winners a winner ;-)) . For those of you who may have missed last weeks email, there is still time!!! Please see below the link and we hope you will give generously to this great cause; http://uk.virginmoneygiving.com/fundraiser-web/fundraiser/showFundraiserProfilePage.action?userUrl=HarryWhittingtonStables It is quietening down up at Hill Barn, with many of the team out to summer grass. We do have a handful of horses that will be running through the summer though. Patronne finished a much improved 2nd at Wincanton last week and got our 2016/17 campaign off to an excellent start. ENTRIES: Hoke Colburn has been declared to run at Southwell this evening in a 2m Bumper at 8.35 . We were delighted with his debut at Warwick, where he showed greenness in the early stages before coming home very strongly to finish 6th in a competitive race. This doesn’t look as strong and Hoke has definitely improved for his Warwick experience, he takes the best form into the race. Charlie Longsdon’s newcomer is well bred and may well be the main danger. It is an Amateur & Conditional jockey’s race so Harry Teal rides and can claim a valuable 10lb. Polstar is set to take his chance at Perth on Thursday in a 2m 0-130 Handicap Hurdle at 3.25 . He ran a cracking race on his return from a break at Ludlow last month, getting outpaced before finishing strongly. He has improved in his work since then and goes to Perth in excellent form.  We were considering Worcester for him too, but Perth’s forecast is dry and that just swayed us. Granted a strong pace we hope Polst can run a big race, Gavin Sheehan takes the ride. REPORT: Patronne ran a much improved race to finish 2nd at Wincanton on Thursday. We had tried different things with Patsy in an attempt to get her to settle and this was definitely a step in the right direction. Gavin sat her in 2nd and she was still a bit free but nowhere near as she had been previously. She jumped far better from a handy position and travelled like the best horse in the race. She turned into the straight with every chance but was outstayed by the eventual winner Lady Persephone. She will now get a handicap mark which will give us more options. This was a huge step in the right direction and if she continues to learn to settle she will unlock her full potential, she is talented. Until next week