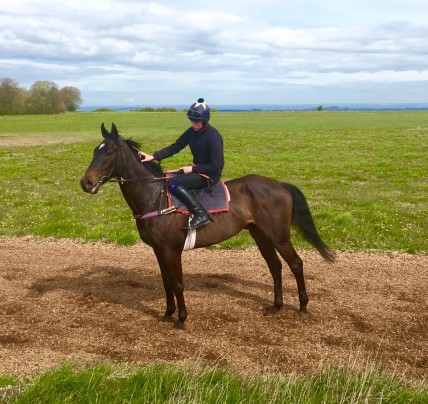 Calling all HWR followers, friends, Owners and keen supporters... Harry has been declared to ride in an inter stable charity flat race at Newbury Racecourse on Friday 13th May on one of the yard horses Qasser. In addition to submitting an entry into the race itself, he has also taken on the obligation to raise a sum of money for the Starlight children's charity as a condition of entry. Please see below the link and we hope you will give generously to this great cause; http://uk.virginmoneygiving.com/fundraiser-web/fundraiser/showFundraiserProfilePage.action?userUrl=HarryWhittingtonStables REPORT: Emerging Force was pulled up in the Irish Daily Mirror Grade 1 at Punchestown on Wednesday. He wasn’t able to take up a handy position at the start and was on the back foot from a very early stage. Force found himself in midfield on the rail under jockey Gavin Sheehan and didn’t jump or travel with his usual fluency, making a few mistakes on the way around.  The field went a good gallop from the outset and as the race developed he found himself slipping back through the field. Emerging Force got detached from 3 out and was pulled up. He had earned his go at a Grade 1 but unfortunately ran well below his best. He will go out for a summer break now and will go novice chasing in the autumn which we are very excited about, he is every inch a chaser. ENTRY: Patronne is set to run at Wincanton tomorrow at 7.50 .  She finished 7th last time out under new tactics, she needs to learn to relax with each run to take steps forward to learn how to enjoy racing. The track and ground should suit her, hopefully she can take a step in the right direction. Gavin Sheehan is set to ride and is getting to know her well. NEW RECRUIT: We are pleased to announce a new recruit in the form of Star Tackle. He was bought at Cheltenham in April and is a scopey, athletic 5yo son of Milan. He won his last start in an Irish point to point in good fashion showing a very likeable attitude. Tackle is from the family of Celtic Native and Red Marauder, and will go novice hurdling next year as a stepping stone to a chasing career. We can’t wait to get him going in the Autum! Until next week,