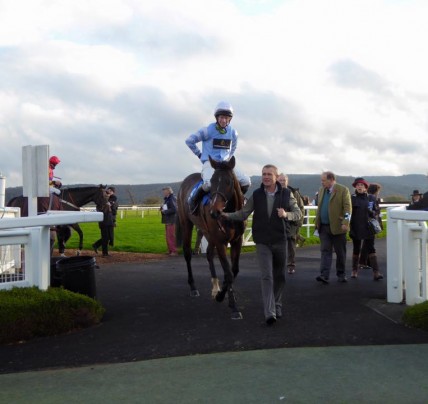 Qasser and Emerging Force make it 10!!

A smooth debut success for Emerging Force on Sunday at Fontwell helped HWR break new ground. His success coupled with Qasser’s seasonal debut win at Taunton on Thursday, took the yard to 10 wins which bettered last year’s total. We obviously couldn't be happier with how things are going... So long may it continue!! REPORTS: QASSER made his seasonal reappearance in a 2m Handicap Hurdle at Taunton on Thursday. He had been very competitive off his mark of 109 last season and we were very hopeful he’d go well. It was a competitive 16 runner field and they went a good gallop from the outset. As the race developed he was travelling so well he took Paul to the front earlier than he would have liked. He managed to get a breather in and kicked for home, the Paul Nicholls trained Amanto emerged as the main danger. Qassy boy produced perfect jumps at the last 2 obstacles and stuck his head down running right through the line. He recorded his 3rd success for the yard and a career best performance. He has always shown a lot of speed but in the past stamina over hurdles has been an issue, however he has come back in a stronger horse and proved here he stayed the trip! we feel he should be very competitive even with an 8 lb rise from the handicapper. Our other runner on the day was PINKPLAY , who made her hurdling debut at Ludlow in a mares only Maiden. She was coming off the back of an excellent seasonal reappearance in a bumper at Worcester and had been schooling very nicely. Nico de Boinville rode her for the first time and jumped her off in mid division, giving her an opportunity to learn and gain confidence. He tracked the odds-on favourite Robins Reef, a very smart bumper horse trained by Nicky Henderson through the race. Robins Reef was green in front hanging across Pink Play over the last 2 obstacles, but she stuck her head down well and ran all the way to the line to finish an excellent second. Nico felt Pink Play was out paced at times and will eventually stay two and a half miles, he was also very impressed with her attitude.  She should come on for the experience and be competitive wherever she goes next, she’s a very exciting prospect!! ZEPHYROSBLEU made his return to the track at Uttoxeter on Saturday in a Maiden Hurdle. He was running a big race on debut in a bumper at Warwick last December before pulling up sharply with a fractured cannon bone. This race was a great opportunity for him to get his racing career back on track. Paul jumped him off in about 3rd and he travelled well through the race giving him a great feel! When the 2 market leaders got racing half a mile from home, Zephyr took a blow and ran on really strongly for 3rd place. He showed greenness at times due to only having the one run on a racecourse, but that will only improve with more experience. He is a horse with a huge amount of quality, it was great to see him complete the course and we just can't wait to get him out again. EMERGINGFORCE took us to Fontwell on Sunday for the yards final runner of the week, he contested a 2m 3f Maiden Hurdle on soft ground. Having had experience in the point to point field last season in Ireland he had been showing us the right signs at home. We were very hopeful he’d be competitive here if he handled the ground! Gavin Sheehan jumped The Force off handy and a big jump at the first took him to the front. He travelled well throughout the race and was very quick at his hurdles. Gavin set a strong gallop and the Force showed a great attitude by switching off. He increased the pace going down the back for the final time and really strung the field out. Turning for home the only challenger was the Giles Smyly trained Hit the Highway, who was off the bridle but challenging. Emerging Force lengthened to go away from him over the last 2 obstacles and win by a very cosy 3 lengths. It was a hugely exciting debut showing loads of class and jumping accurately. Anything this lad does over hurdles is a bonus, he is every inch a chaser and is certainly one to get excited about!! ENTRIES: BIGSOCIETY has been declared to run in the 2.30 at Chepstow tomorrow in a 3m Handicap Chase. He was disappointing at Exeter on debut 2 weeks ago where we tried him in blinkers for the first time, he didn’t take to them at all and it really disappointed him. We are on a retrieval mission, he has been dropped 7lb by the handicapper which means he can run in this Class 4. The trainer took him hunting last Saturday at the opening meet which he loved, so let’s hope that’s helped sweeten him up. The ground will be testing which is ideal, he’s run well at Chepstow before but he does have some major questions to answer. ISLADIMILANO is entered in a Novice Hurdle at Market Rasen on Thursday at 12.30 . He ran a much improved race in a bumper on seasonal reappearance at Ffos Las last month and is now ready to go novice hurdling. He is only a 4yo and is developing all the time, taking to hurdling well in his schooling sessions with Chris King. He is a chaser for the future, so hurdling is just his next stage of his progression and he will start over 2m 2f. The trip will be sharp enough for him but it will give him a nice introduction before stepping up in trip down the line. He has a bright future and has lots of improvement in him. Until next week,