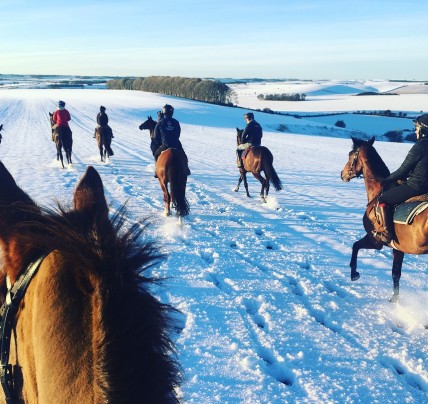 THIS WEEK   After a lovely morning last Saturday spent with our racing club, temperatures were beginning to drop significantly.  Throughout the course of the weekend the blizzard of snow set in, travelling us into Narnia when we woke up on Monday morning!  The driveway became impassable leaving the trainer to do all the school runs picking everyone up around the valley to do as best we could to get the horses out that day.  Overnight the temperatures dropped further leaving perfect frozen powder on the ground which allowed us to canter the horses through the winter paradise the following morning.  It really have been quite a week all made possible as well as enjoyable thanks to our amazing team of staff.   We're now back to business as usual and have returned back through Narnia's wooden door!  Photo evidence of these adventures are available below as well as a fantastic new promo video we are launching today so take a look and please share amongst friends...   REPORTS   Perfect Myth produced an excellent performance to finish 2nd on racecourse debut at Wetherby on Saturday.  She set off in mid division under Harry Bannister and was very green early on, bronking several times as the pair jumped off.  They went a good pace and this allowed her to settle nicely.  The field got racing turning for home and they started to get stretched out.  When Harry asked her to pick up she stuck her head down and battled all the way up the run in to go down by just under a length.  This was a very likeable debut and she can only improve, physically and mentally for the experience.   ENTRIES   Bridge of Cally is set to have his second hurdle start at either Southwell on Sunday or Ludlow on Wednesday.  The plan was to run at Huntingdon on Sunday, but that meeting was lost to the snow.  He showed improved form at Huntingdon on hurdle debut and has been in great form since.  He is learning to relax all the time and he should produce another improved performance.   The Cothill Racing Club's Vbadge Treat is set to make her hurdles debut at either Fakenham or Ludlow next week.  She's always showed plenty of ability at home but is yet to translate that to the track.  Her schooling has gone well, she's from a good jumping family and we expect an improved performance here.  She's in good form.   Taras Day is set to make her hurdles debut at either Fakenham on Tuesday or Ludlow on Wednesday.  She ran well for a long way on debut at Warwick when she raced a bit freely and has come on for that experience at home.  Her schooling has gone well and we are looking forward to getting her started over obstacles.   The Go Tou Man holds an entry at Towcester on Thursday, where he could make his hurdling debut.  He has run with credit on both his bumper starts, he is a very natural jumper and is ready to get going over hurdles.  He is a bit of a monkey at home and he will continue to improve as he gets more experience.  He will start over the minimum trip, but is from a staying family and will enjoy further in time. 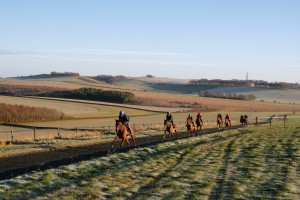