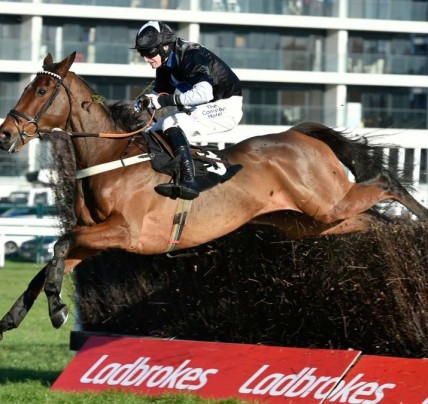 THIS WEEK   We had a brilliant day at Newbury last Friday with great runs from both horses and a lovely winner in Bigmartre who sailed his way to victory in fine style against a strong field.  Not forgetting of course this was the same race Arzal won 2 years back so we just hope BigM continues to improve and fly the flag for us in the same way following in his footsteps.  We finished off the week well with Octagon winning for the second time in a row on Sunday notching up the 4th winner of last week and adding to our total season tally which now stands at 17.   REPORTS   Simply The Betts finished 3rd on hurdles debut at Newbury last Friday.  This is normally one of the best maiden hurdles of the year and this renewal was no different.  There wasn't much pace early on and he was a bit free in the early stages, but when they went on a stride down the back straight he settled nicely.  Turning for home he made stylish headway and looked to be going the best coming to 3 out, but got in a bit tight and made a mistake.  This handed Lostintranslation an advantage that Simply The Betts could never make back up.  He stuck on up the run in and got very tired in the tacky ground after the last, to go down by just under 7 lengths.  This was a pleasing debut and he can only improve from here.   Bigmartre made it 2 from 2 this season with a faultless jumping display at Newbury on Friday.  He jumped off in the front rank and lead the field over the first couple, before getting headed by the free going Cyrname.  He jumped his way back to the front leaving the back straight and Harry asked him to stretch the field.  He kept picking up coming to 4 out but was almost carried out by the loose horse.  He switched him back to the inside produced great jumps at the last 3 fences and went away to win by a comfortable 4 1/2 lengths.  This was an eye catching display by this fast improving chaser and there's more to come from him going forward.   Blue Valentine shaped nicely before falling on her first run for the yard at Doncaster on Saturday.  She jumped well throughout the contest and caught the eye with the way she travelled.  She was going as well as anything coming to 3 out, but she got very tired coming to the 2nd last.  Unfortunately she couldn't find a leg at the last and fell.  She is none the worse for the fall and is likely to come back in trip next time out.   Octagon made it 2 from 2 with a gutsy display at Leicester on Sunday.  He had to carry a penalty for his win at Southwell and this made things tougher.  The field went very quick and he sat 2nd for most of the way.  The front runner Mister Big came back to the field coming to 3 out and the race started to develop.  Octagon was joined by Clock on Tom and they eyeballed each other all the way down the home straight.  Octagon showed a great attitude to knuckle down and win by around 2 lengths.  A step up in trip is likely next time out.   Pasaka Boy finished down the field on his return from a break at Leicester on Sunday.  He travelled nicely through the early part of the contest and looked to enjoy the soft ground, bit a mistake in the middle of the race seemed to really put him on the back foot.  He was still with the field turning for home but got very tired in the run in, eventually finishing 9th.  It was his first run for a long time and he should improve. 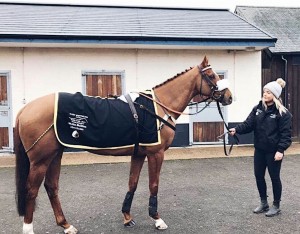 Eyesopenwideawake finished 4th on his 2nd chase start at Southwell on Tuesday.  There was lots of pace on but he still managed to take the field along for the first couple of obstacles.  Turning toward the stands though the field bunched up and it was clear that he wasn't travelling with the same zest that he has at Kempton last month.  He was headed down the back straight but to his credit he kept in contention turning for home.  A mistake in the straight ended any chance, but he did stick on for 4th.  The run may well have come too soon after his huge effort at Kempton.   ENTRIES   Let's Get At It held a couple entries this week, but with the testing ground around he is likely to wait for Warwick on Thursday.  He is a good moving horse, who's been doing everything nicely at home and is ready to make his bumper debut.  We look forward to getting him on the track and learning some more about him.   Perfect Myth is set to have her first racecourse start at Wetherby on Saturday.  She is a 3yo filly by Midnight Legend out of a flat winning mare and she is another we are looking forward to getting started with.  If the ground became too testing, she has the option of waiting for Newbury later in the month.   Bridge of Cally is set to have his 2nd hurdles start at Huntingdon on Sunday.  He ran an excellent race on hurdles debut over course and distance, he's sharper for that run at home and we are hopeful he can take another step forward.  He will continue to improve with experience and should appreciate a step up in trip later in the season.   The Harry Whittington Racing Club's Spirit of Rome is set to make her hurdles debut at Fontwell on Monday.  She is a 3yo filly by Mastercraftsman and she is set to go juvenile hurdling.  She stayed a mile and half well on the flat and possess all the right attributes to be a better jumper than flat horse.  She has jumpers in her family and is very genuine.  We should learn a lot from this run.   Another runner next week for The Harry Whittington Racing Club will be Tangoed who holds an entry at Taunton on Thursday.  She didn't seem to appreciate the stiff track at Towcester last time out, so we've switched her back to a sharp, flat track on better ground.  Hopefully she can produce an improved performance and start to show her bumper form over obstacles.