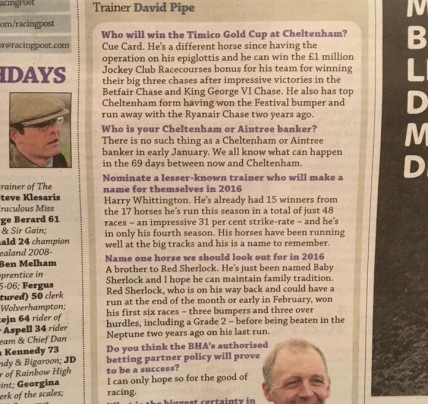 After a very quiet week the yard really gets going again with lots of entries over the coming days!! The rain has been relentless the last few weeks, so it’s touch and go whether all the meetings will get the go ahead. But fingers crossed they can beat the weather!! REPORT: FOUROVAKIND showed up extremely well for a long way in Saturdays Welsh National, before eventually pulling up in torrid conditions. He took a hefty bump going into the first bend and got shuffled back through the field. As soon as Nico pulled him wide though Fourovakind got into a lovely rhythm. As the race developed he travelled through the race in eye catching style, picking off rivals one after another. Going out on the final circuit he looked to be going as well as anything, but slow jumps at the last 2 fences down the back straight showed the petrol gauge was nearly empty. Nico did the sensible thing and pulled him up, we were delighted with the run and are looking forward to the rest of the season with him. He was been dropped 3lbs to a mark of 124 which makes him very competitive in a 0-130!!! ENTRIES: Two Hill Barn inmates are making the long trip north to Wetherby today; FRIZZO runs in the 2m 3f handicap chase at 3.15 . He has placed on both starts for the yard this year, with his best effort first time out on better ground at Fontwell on debut. He goes to Wetherby in excellent form and the track should suit, he has handled soft ground in the past but this may well be soft enough for him. As the ground across the country won’t improve in the near future it is important we get a run into him. Gavin Sheehan rides for the first time. The other runner on the card is WOOLSTONEONE  in the bumper at 3.45 , who was very impressive when winning on debut at Newbury in December. This is the last fillies junior bumper of the year so we felt it was a nice race for her to run in under a penalty. It looks a bit of a match with the Alan King trained Passmore, who receives 7lb from Woolstone One. The testing ground isn’t a worry and we can’t wait as she has been in excellent form at home. The plan was to run ZEPHYROSBLEU at Ffos Las on Monday, however the meeting has been abandoned. He showed improved form when staying on really strongly at Towcester the last day, and has been giving a mark so he can now run in handicaps. He is a big scopey individual who is improving physical and mentally all the time, we are hopeful he can take another step forward on the track. The testing ground shouldn’t pose any problems, he has some entries at other venues, the first of those being at Wincanton on Thursday at 1.35 . PINKPLAY is entered in a Mares only handicap hurdle at Exeter on Tuesday at 2.10 . They are holding a precautionary inspection at 1pm on Sunday, if the meeting passes this race will be considered along with a couple of entries the following week. She is in good form at home and the stiffer track should play to her strengths. She showed she handles most conditions this year already, she is a progressive mare with an excellent attitude. PATRONNE holds an entry in the juvenile hurdle at Newbury on Wednesday at 1.25 . She was declared to run at Fakenham on Tuesday before the meeting was abandoned. She is a strong, scopey filly who is built to jump obstacles and is an exciting recruit to the yard. The Newbury race has a couple of highly rated entries from the Henderson and Nicholls yards but both of those horses would be giving her 14lb. If she doesn’t run Wednesday, there are some more options later in the month. BIGSOCIETY is being targeted at the Somerset National at Wincanton on Thursday at 2.45 . He gave the Hill Barn Racing Club a great day out at Newbury over the festive period, when he may well have taken the Mandarin Chase with a decent jump at the last. This race was the next logical step now he has been raised to a rating of 126. The ground is heavy which is ideal for Big S and the trip should really suit. He has been in great form since Newbury and enjoyed a day out hunting last Saturday. Let’s hope he can take another step forward here!! Until next week,