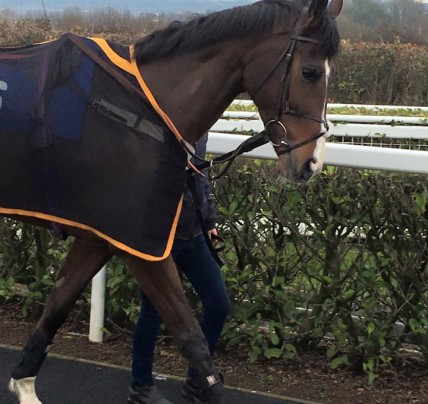 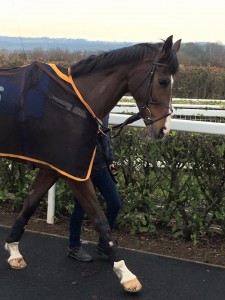 NEWS Although we’ve had a torrid time with the weather over the past week, thankfully a handful of meetings have beaten the weather. Woolstone One’s win on Saturday took the seasons total to 16, which is fantastic and doubles last year’s total. Bigmartre will be flying the flag for the yard tomorrow in the Grade 2 Supreme Novices Trial at Haydock and it is incredibly exciting to go into this type of race with such a live contender. REPORTS: WOOLSTONEONE took her career total to 2/2 with a professional performance at Wetherby last Saturday. She carried a penalty for her Newbury victory but that wasn’t enough to stop her. She jumped off in 2nd under Gavin Sheehan, but as soon the field turned down the back straight the leader just wasn’t going quick enough for her. Gavin took her to the front and she soon strode into a commanding lead. He gave Wooly a breather on the bottom turn, stacked the field up and then kicked for home. She showed an excellent turn of foot to quicken away and win by an easy 13 lengths. She looks a very exciting and high quality filly!! We'll just see how she is over the coming weeks, but she may well be targeted at the Mares Listed Bumper at Sandown on Imperial Cup day. ZEPHYROSBLEU ran a hugely encouraging race to finish 2nd on handicap debut at Wincanton yesterday. The original plan was to run at Ffos Las on Monday but the meeting was defeated by the weather, so we decided to take our chance here. It was a competitive 16 runner field and they went a decent pace from the outset. Gavin gave Zephyros Bleu some room on the outside so he got a clear view of his hurdles and he jumped with huge improvement from his previous races.  He still showed greenness throughout the race but every time Gavin gave him a squeeze he picked up for him. As the field turned down the back straight he made an eye catching move to latch onto the tail end of the leaders. Big Z turned into the straight with every chance, came to the last in 2nd and nodded slightly on landing but then stayed on powerfully to go down by a head in 2nd. It was a hugely exciting performance from Zephyr who is improving all the time and a huge step forward from Towcester. We look forward to another handicap in about a month’s time!! The other runner on the card was BIGSOCIETY who took his chance in the Somerset National. He ran well at Newbury on his last start but was unable to match that level of form around this sharper track and was eventually pulled up. There was a false start which really didn’t help as Big S was half left at the standing start and was on the back foot thereafter. The field went a ferocious gallop from the outset and Gavin tried everything possible to get Big S back into contention but in the end he had to pull him up. Only 5 horses finished the race which shows how quick they went. We will regroup and try to find another race in the coming weeks. ENTRIES: BIGMARTRE makes the trip back to Haydock tomorrow to contest the Grade 2 Supreme Novices Hurdle Trial at - 2.05 . He won over course and distance in excellent style the last day and has earned his step up in class. The field is a small and select one, but Bigmartre is not out of place. He has rock solid novice form and is a horse that is on the upgrade. Le Prezien sets the benchmark being rated 140 and the Phillip Hobbs trained Vieux Lille looks a smart performer but we cannot wait to take them on. The very testing ground shouldn’t be a problem for BIGM!. FATCATINTHEHAT is being aimed at a 2 mile Handicap Hurdle on Monday. He went well on debut for a long way at Haydock, but got very tired on the run in. Gavin felt it was his breathing that stopped him, so he has had a wind op and is now ready to go again. He has been dropped to a mark of 119 and now switched to Kempton which should really suit him on the testing ground. If he can take a step in the right direction Fatcat should be right in the mix here. Until next week,