THIS WEEK From the best week of the season last week, to this week, which has been in many ways one of the most challenging for all.  On Tuesday the BHA made an announcement to suspend racing in the UK from the following day until the end of April.  Which sadly means of course that our season has been brought to an abrupt end.   So with 30 winners including our first Cheltenham Festival victory, we are going out with our heads held high and with plenty to be grateful for.  For the time being we are continuing with 'business as usual', as best we can and will keep kicking until racing resumes.   We would like to take this opportunity to say a huge thank you to each and every one of you who has supported us; to our loyal owners, sponsors and our hard working team who have stuck by us and kept the dreams alive, and to everyone who has been in touch recently to congratulate us - the support has been quite literally unbelievable and we are so grateful. 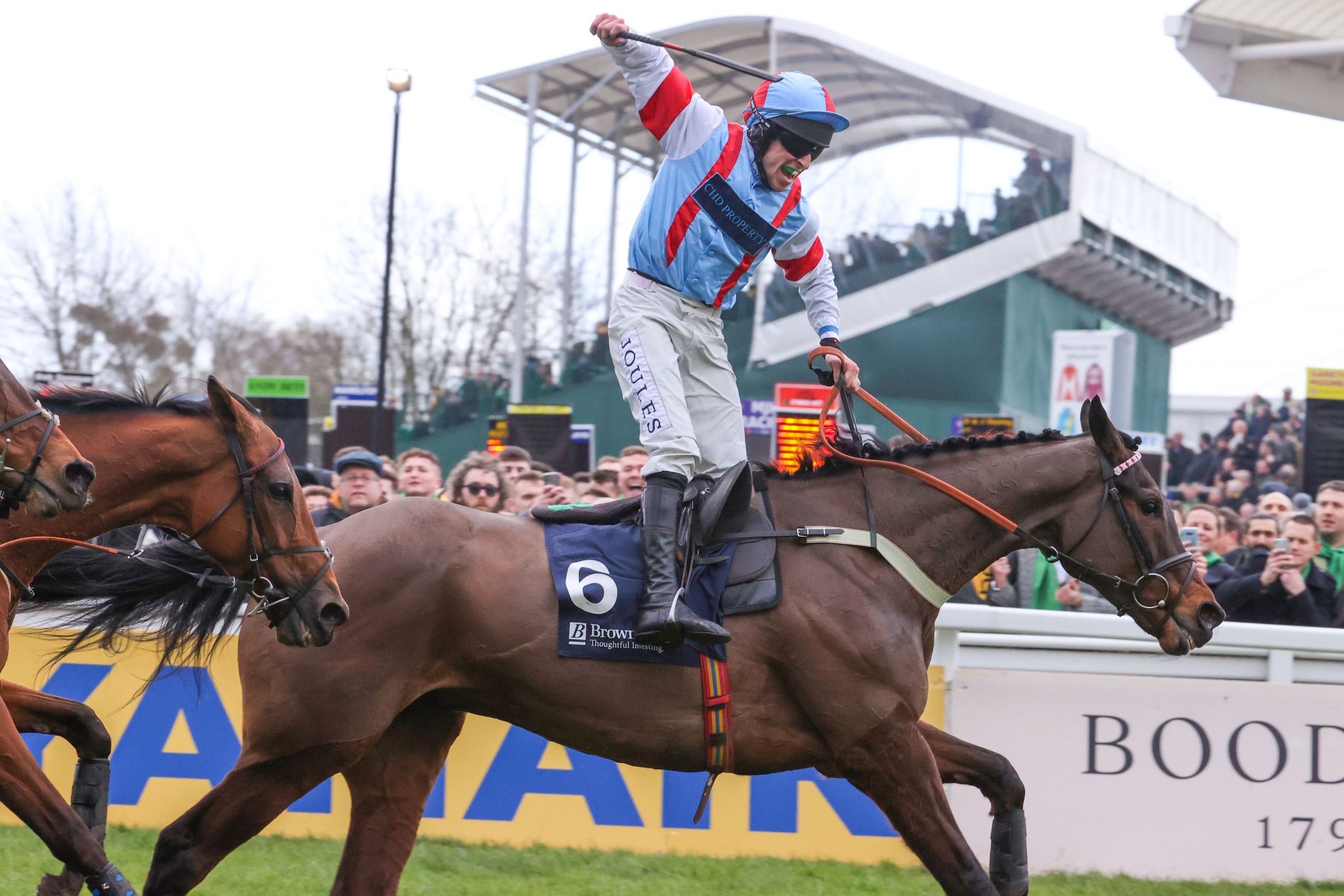 REPORTS KHAGE Khage lined up in what looked to be a very competitive handicap hurdle at Uttoxeter last Saturday.  He jumped off in a handy a position and for the first mile of the race he jumped and travelled well.  As the race developed he lost his position quite quickly, and from there on in was under a lot of pressure.  Jockey Gavin Sheehan reported that it was atrocious conditions and he just wasn’t able to act on it.  He will now be wound down as the season has finished, so he will have a break before coming back next season. SHANTOU VOW Shantou Vow headed back to Southwell on Monday, the track he won around in October.  It was his first start up in trip to two and a half miles which we felt would bring improvement.  He won well round the track in October, but since then he’s had a little bit of an up-and-down season.  He did not like the big field handicap at Hereford and he showed signs of still being green at Chepstow last time out, so we were hoping for a more polished performance here.  This was a step back in the right direction and with a small field it was more to his liking. Jockey Daryl Jacob gave him a fabulous ride and nurtured him all the way round.  He was on and off the bridal for much of the way, but turning in he had every chance.  As they headed down the home straight he just had more left in the tank and it was great to get another win into him.  That will be it now for him this season, so we will look to wind down and  turn him away to then bring him back again for next season. 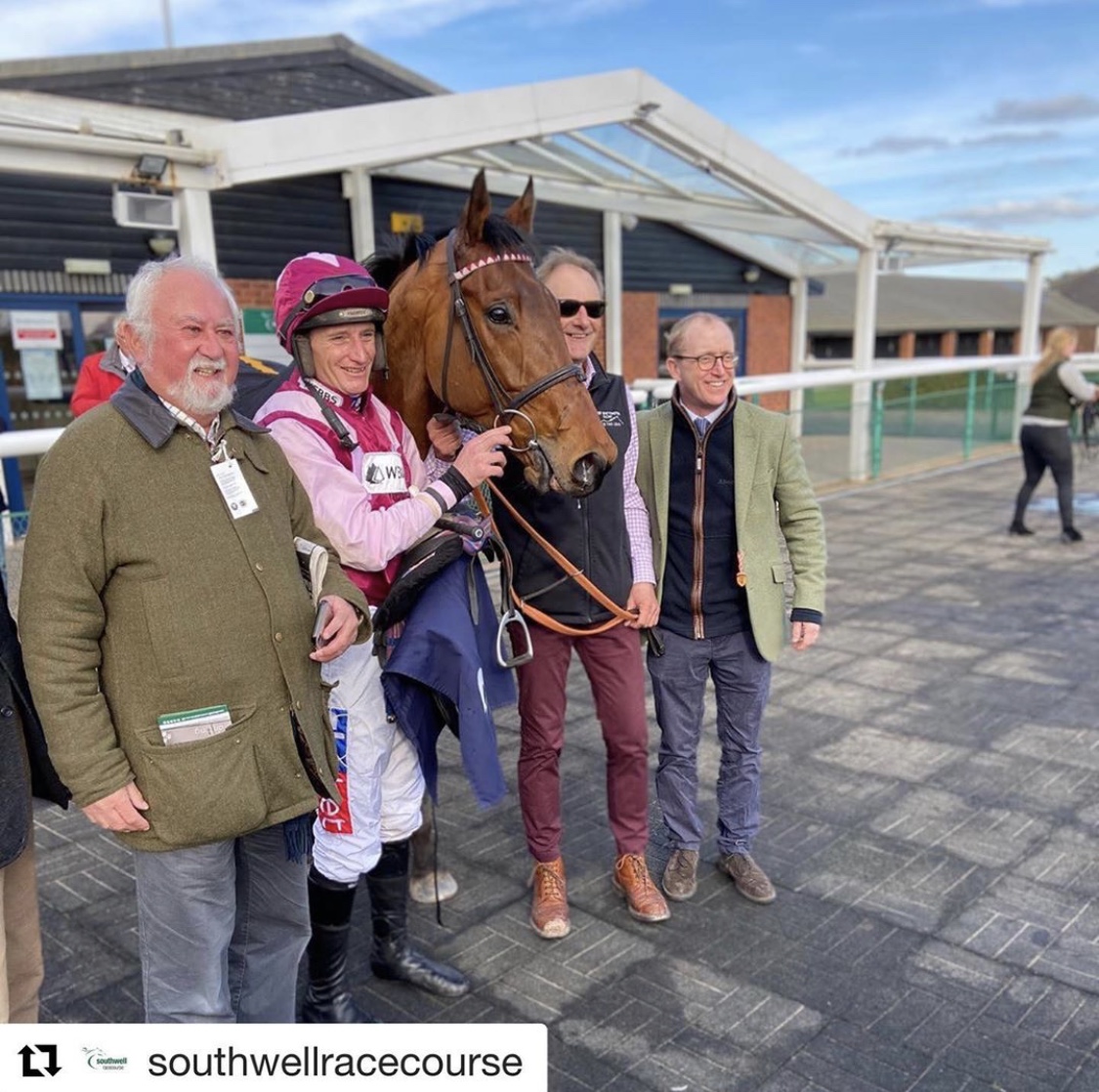 FRANIGANE Franigane had his yard debut in the bumper at Wetherby on Tuesday.  We decided to give him a break after buying him in November, with a view to giving him one bumper run then putting him away before going hurdling next season.  He has been showing plenty of ability in his work at home and has also been schooling very nicely.  He travelled well throughout the race, and despite being a touch keen in the early stages he had every chance turning in.  His finishing effort was a little bit tired as he was hanging to one side, he ran well though.  He will now be put away now for a Spring break before going novice hurdling in the Autumn. IN OTHER NEWS... CORONAVIRUS NEWS

Tuesday 17th March 2020 The British Horseracing Authority has confirmed that all horseracing in Britain will be suspended with effect from Wednesday 18th March 2020. The Jockey Club announced that The Randox Health Grand National has been cancelled due to coronavirus. Two race meetings are scheduled to take place behind closed doors at Wetherby and Taunton today, but as of tomorrow race meetings will cease up to the end of April. The decision will be kept under constant review. The formal decision was taken by Board of the British Horseracing Authority this morning based on the statements made by the government yesterday and after consultation with senior industry leaders. Medical Advisers to the RCA and the BHA, who have been advising an industry group on the response to the crisis, have also been consulted. The BHA took the decision to protect essential emergency services and the health and welfare of staff working in the racing industry. Racecourses and racing have obligations to ensure the safety of participants and provide medical cover which clearly cannot be fulfilled in these circumstances. This follows the new advice issued by government yesterday to combat the spread of the virus. Nick Rust, the Chief Executive of the BHA, said: “This is a national emergency the like of which most of us have never seen before. We’re a sport that is proud of its connection to rural communities and to the local businesses that support our industry. But our first duty is to the health of the public, our customers and to racing industry participants and staff so we have decided to suspend racing following the government’s latest advice. “Racing is a family and I know we will pull together over the coming days, weeks and months and support each other. By stopping racing, we can free up medical resources, doctors and ambulances, be they private sector or NHS, to assist in the national effort to fight this virus. And we can support racing industry participants and staff as they face up to the personal challenges ahead and care for their own families. “There will be difficult months ahead for many of us. We need to focus now on ensuring that we can continue to look after our horses as the virus affects the thousands of participants and staff who dedicate their lives to caring for animals. We need to do what we can to support businesses inside and outside racing and the many people whose livelihoods depend upon this £4 billion industry. “We are in constant contact with government which understands the very significant consequences of this decision for jobs and businesses. We will work with them to do our best to manage the impact. “Racing leaders will keep today’s decision under constant review and endeavour to keep all customers, participants, staff and dependent businesses informed as the situation progresses.”   LINK TO RACING POST LATEST NEWS A MESSAGE FROM HARRY... "We are so lucky to have had the most incredible week we could have asked for at Cheltenham.  But this week is a very different one, with the end of the season brought forward and the country bracing itself for a crisis.  But health is more important than anything and it is vital that we all stick together to find a way to get through the coming months.  We at HWR are adopting a policy with positivity, communication and planning in order to get through it. We wish everyone extremely well in the meantime, stay healthy and hopefully we will be back to normal in no time. On a final note we are immensely grateful to all the Owners, Staff, Sponsors and supporters of HWR for an amazing season." 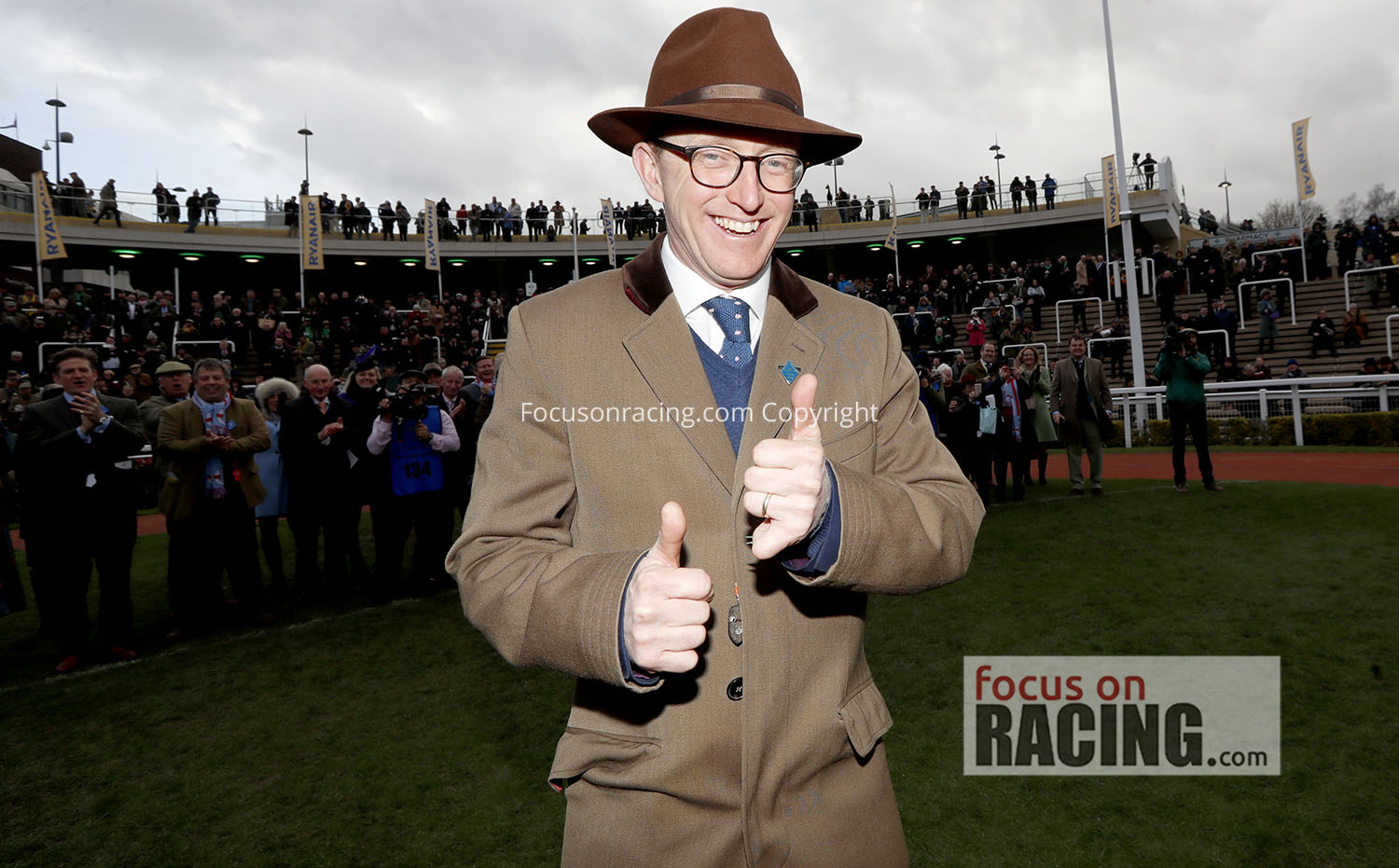 HWR 5 TO FOLLOW COMPETITION   THE FINAL RESULTS... After an rather abrupt end to the season we are pleased to announce the Winner of the Five to Follow competition is:   Our Pupil Assistant, George Edgedale!!   1st  George Edgedale with 280 points Join 2nd Ian Murray & Rupert Fowler with 276 points 3rd Jack Nash with 264 points   Congratulations! Please get in touch to collect your winnings... (admin@harrywhittington.co.uk)   For those of you who missed out this year here is a run down of the top 30 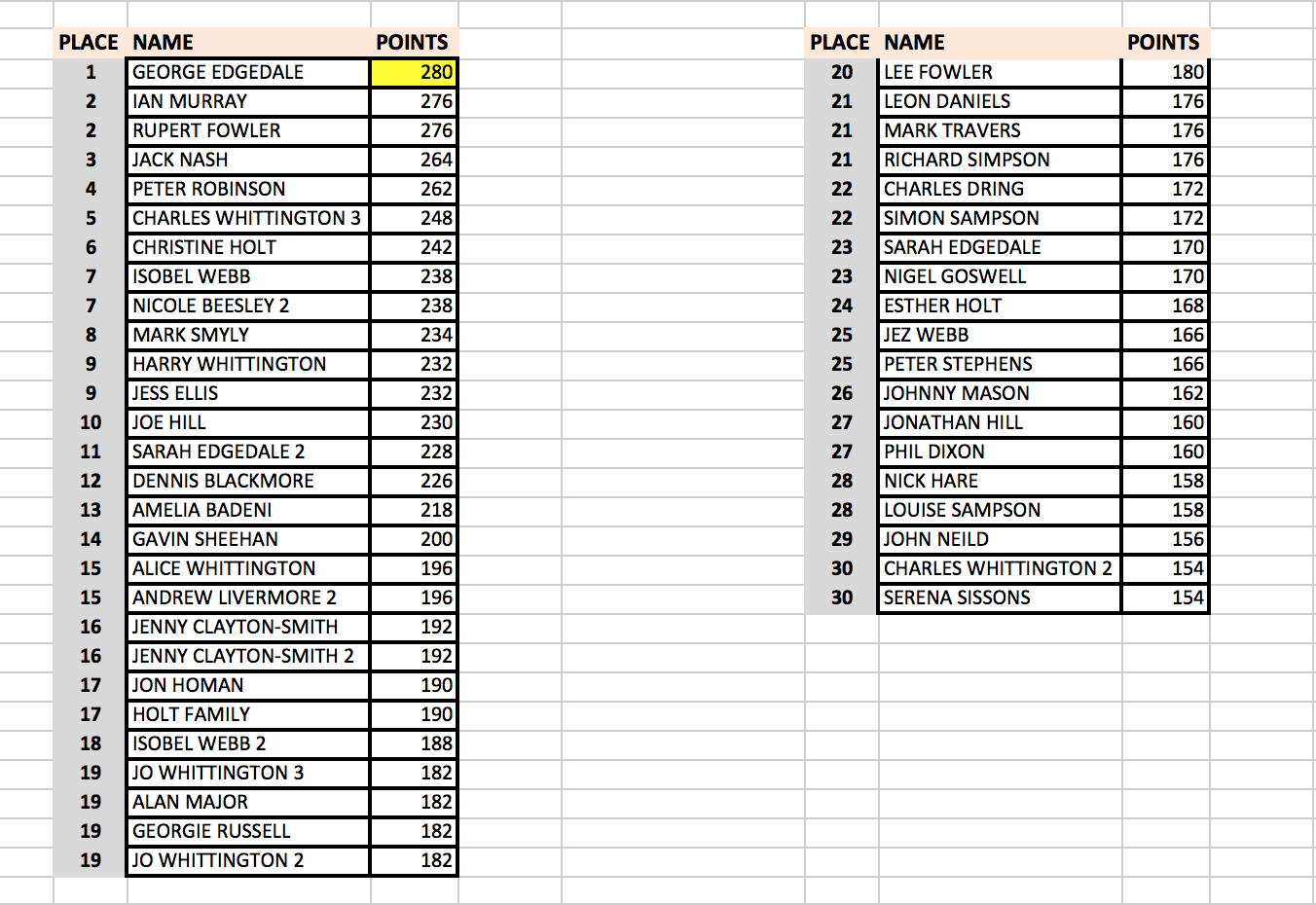