THIS WEEK Another year and another brilliant Cheltenham Festival filled with drama, emotion and some thrilling results.  We're pleased to report both horses we had representing have returned home safe and sound and we hope you have all enjoyed the week.  There's still plenty more in store in the coming weeks with Aintree just around the corner and plenty more battles out there to be won... 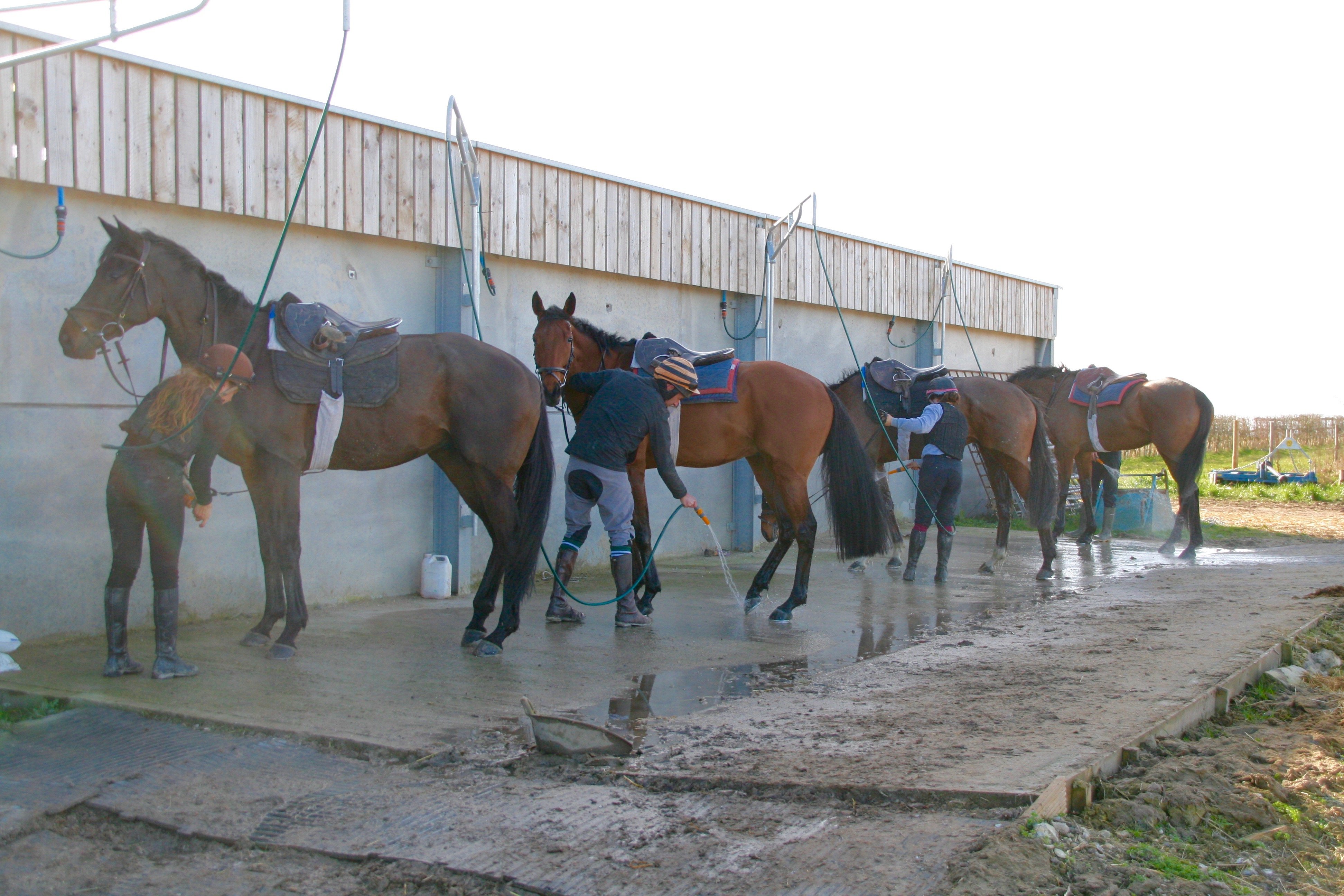 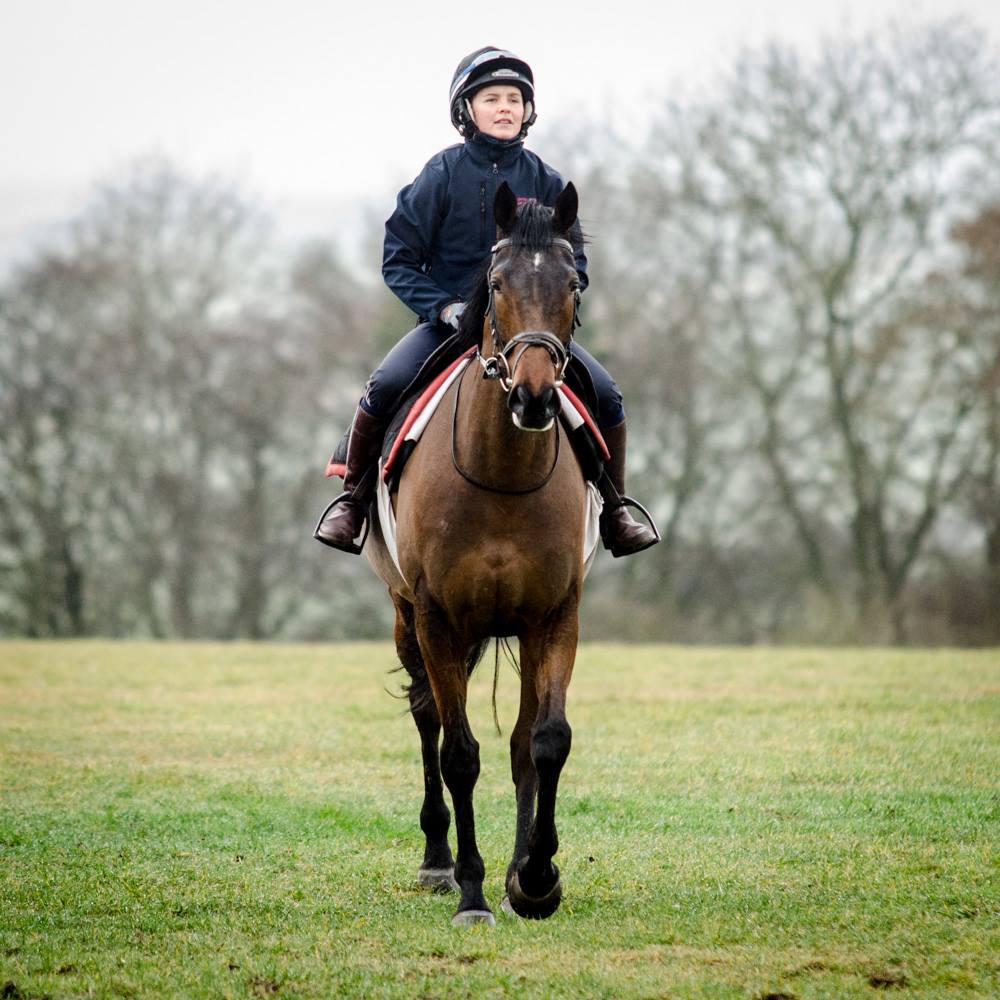 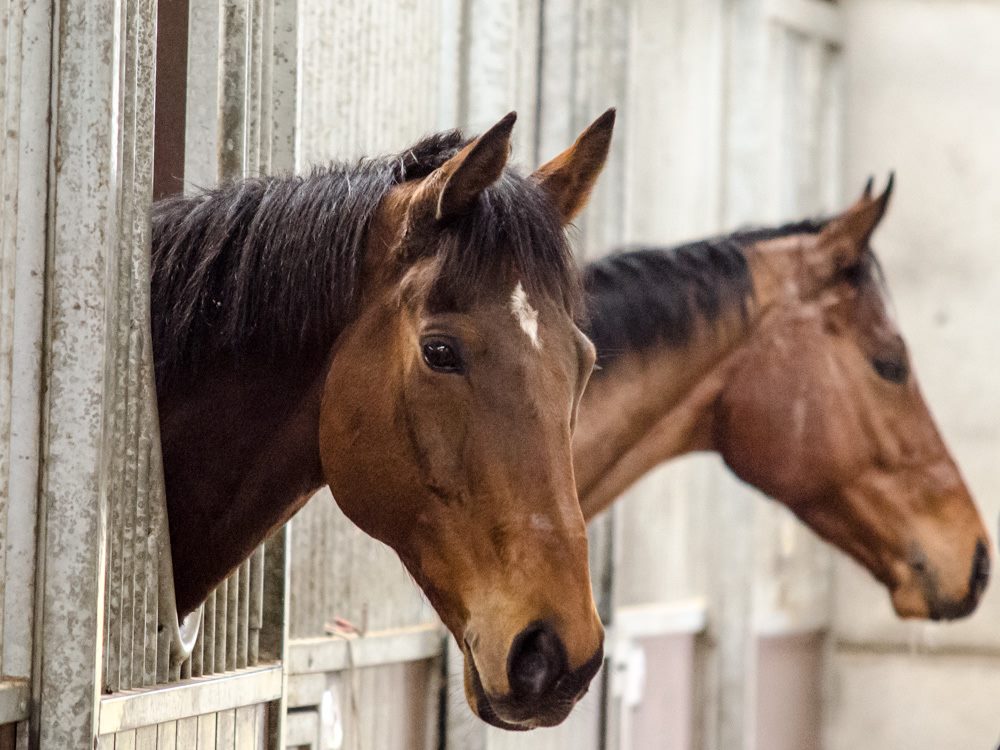 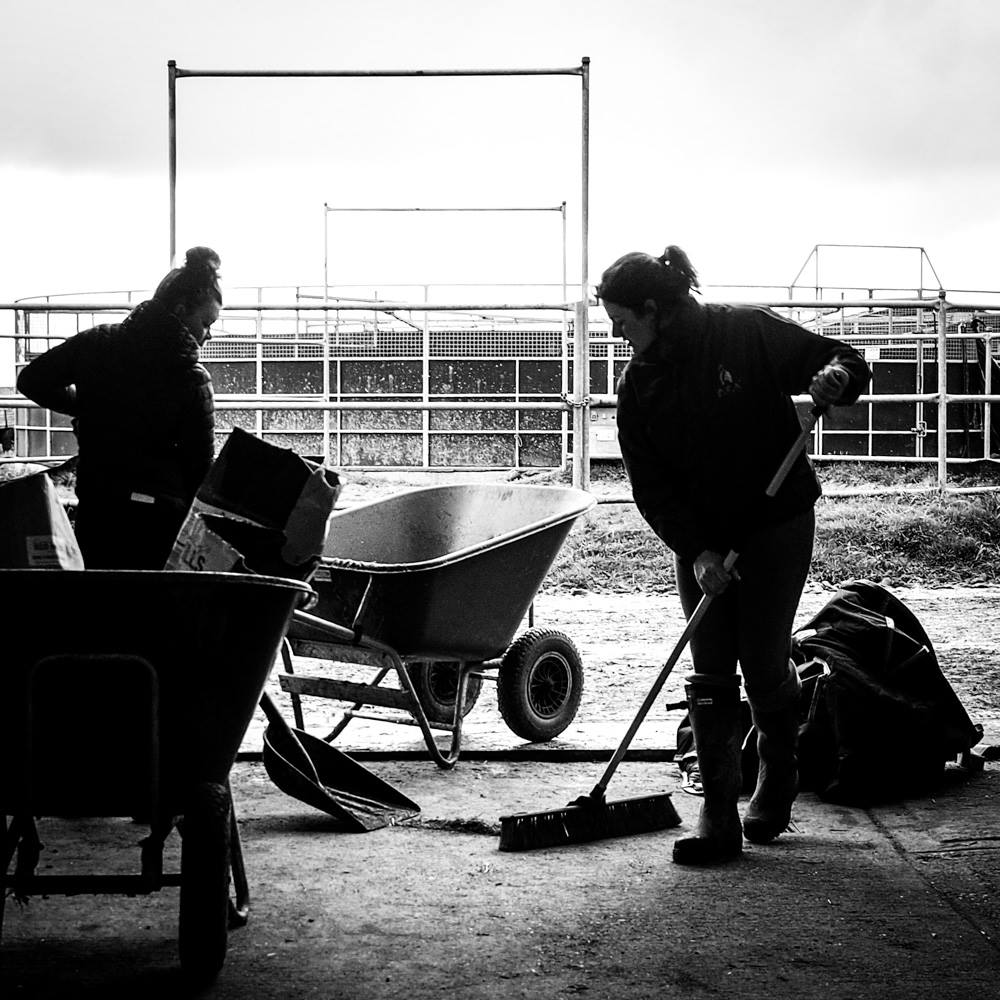 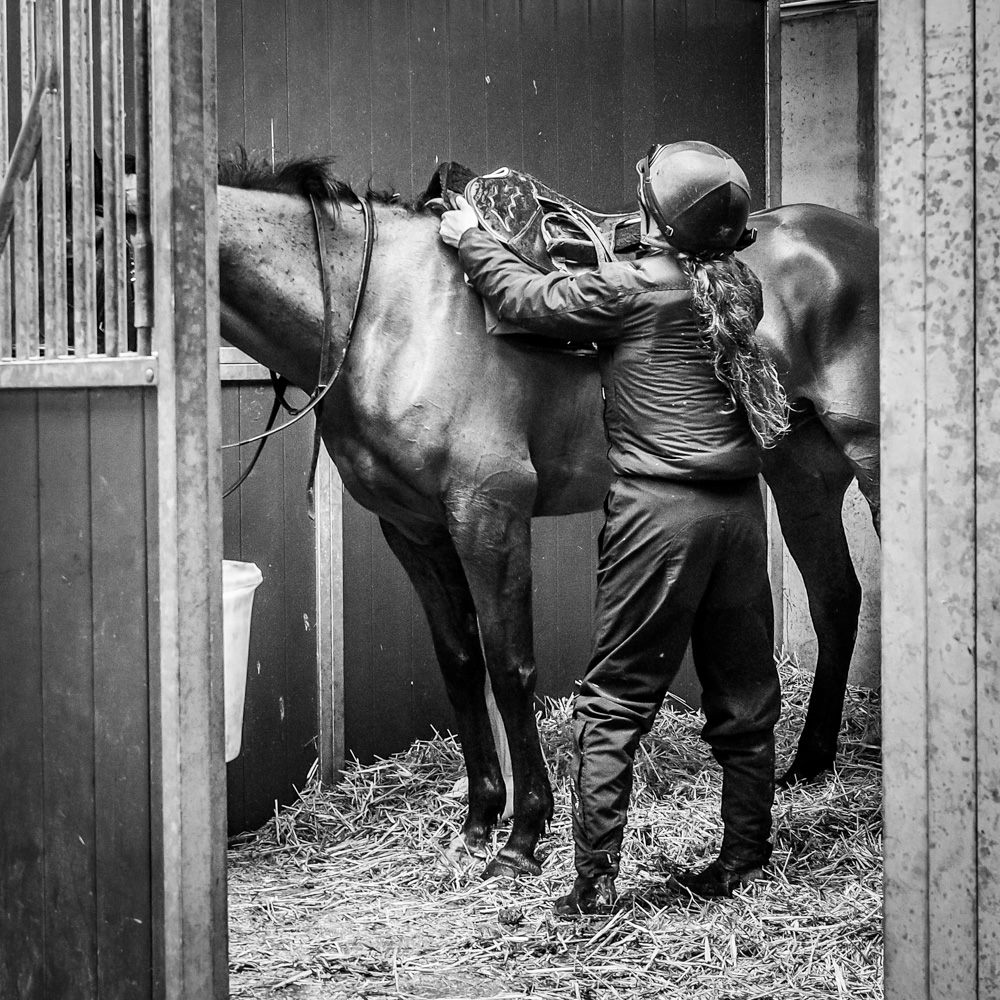 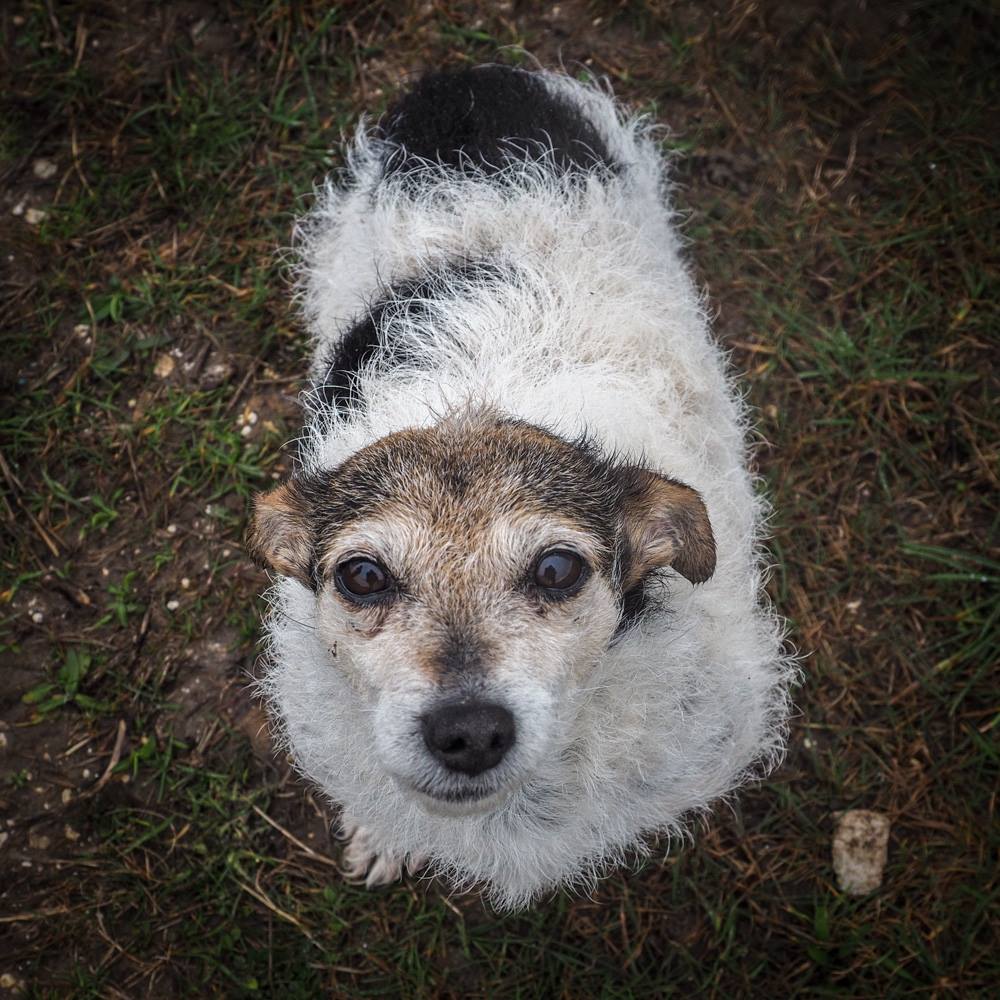 Honourmission ran on Saturday at Hereford in the MansionBet Novices' Hurdle over 2m3f.  He was coming into this race off the back of a disappointing bumper run so we were hoping that going over hurdles might bring about some improvement.  We have been schooling him over hurdles at home and due to coming over from France he is a natural so we decided to kick on and run him over hurdles.  It looked a hot race on paper so we just wanted to see him jump and travel and enjoy himself.  He did exactly that and coming to the 4th last he looked to have every chance but from the top of the hill he got tired in the ground then the pace quickened and he plugged on at the same place to finish mid division.  He will be dropped back to 2m for the next run to sharpen him up and he will be one for the handicaps in the summer on good ground.

VINNIE LEWIS Vinnie Lewis lined up in the Matchbook "Best Value Exchange" Handicap Chase over 3m at Sandown on Saturday.  He was coming into this after a very disappointing run at Chepstow over hurdles.  We later found that he was suffering from very bad ulcers which were treated throughout January.  What we wanted to see is him jump and travel enjoying himself and run a competitive race back over fences after over a year.  Page Fuller was riding him for the first time and she jumped off in the perfect position, the partnership between horse and rider seemed tailor-made.  Down over railway fence on the first circuit he looked to be really enjoying himself and giving everyone a great thrill.  Turning in he was slightly outpaced by the leader to whom we were giving a stone in weight.  A brilliant jump at the second last meant that he got slightly closer to the leader but unfortunately he was always holding us.  He ran an almighty race to finish runner up and we couldn't be happier with this come back effort.  He will now head for The West Wales National at Ffos las on Easter Sunday. 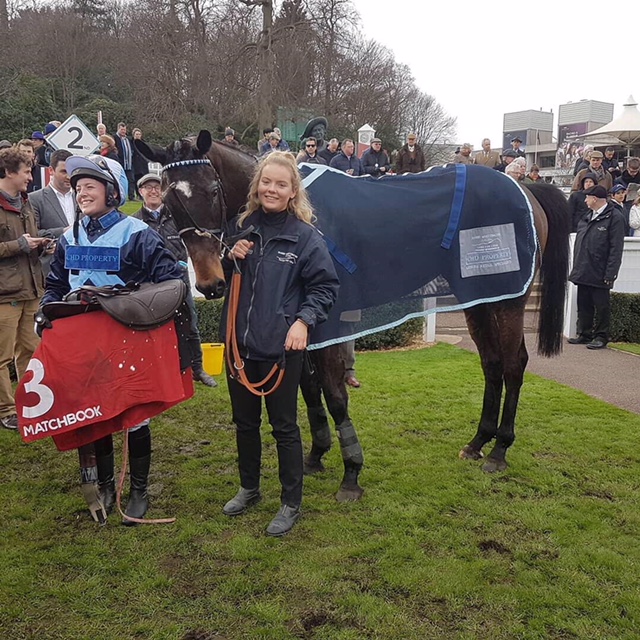 SPARKLEANDSHINE Sparkleandshine took his chance in the William Hill Cheltenham Festival £1M Golden Race Handicap Hurdle over 2m3f at Taunton on Monday.  This was his second start for the yard where he looked to jump and travel fine through the race.  Turning in he looked to have every chance but unfortunately he didn’t stay the trip in the ground.  We have learnt plenty form the run and we will look to run him again over hurdles in a months time.  He is a nice chasing prospect for the future that we should have a lot of fun with during the summer. SAINT CALVADOS Saint Calvados headed to Cheltenham on Wednesday to run in the Grade 1 Betway Queen Mother Champion Chase over 2 miles.  We weren’t necessarily going to make the running on this occasion but evidently there was going to be no pace with 4 of the rivals wanting to be held on to.  Calvados thrives off being ridden in a positive manner and so we thought we would stick to the usual plan of making the running.  In the first time cheek pieces he jumped and travelled sweetly.  He set a nice even gallop and looked to be going well within himself.  Having put in some fantastic jumps down the back and with Altior making a mistake at the water jump it became extremely exciting to watch.  At the top of the hill he looked to be going ok still and just about still had the lead as they were coming down the hill.  When they turned in and passed him he looked suddenly very tired, he then plugged on and was careful at the last to finish 7th.  Gavin reported that turning down the back he made a noise so he was always going to be having to try to fill him up to get him home rather than getting the opposition on the stretch.  At the top of the hill he started making the noise again and Gavin is adamant that he is in need of a wind operation and that his class got him home.  He is booked into Ben Brains next week where he will have a full MOT to find out exactly what we are dealing with.  He is still a 6 year old with huge potential and we're sure he will be back in the winners enclosure before too long. 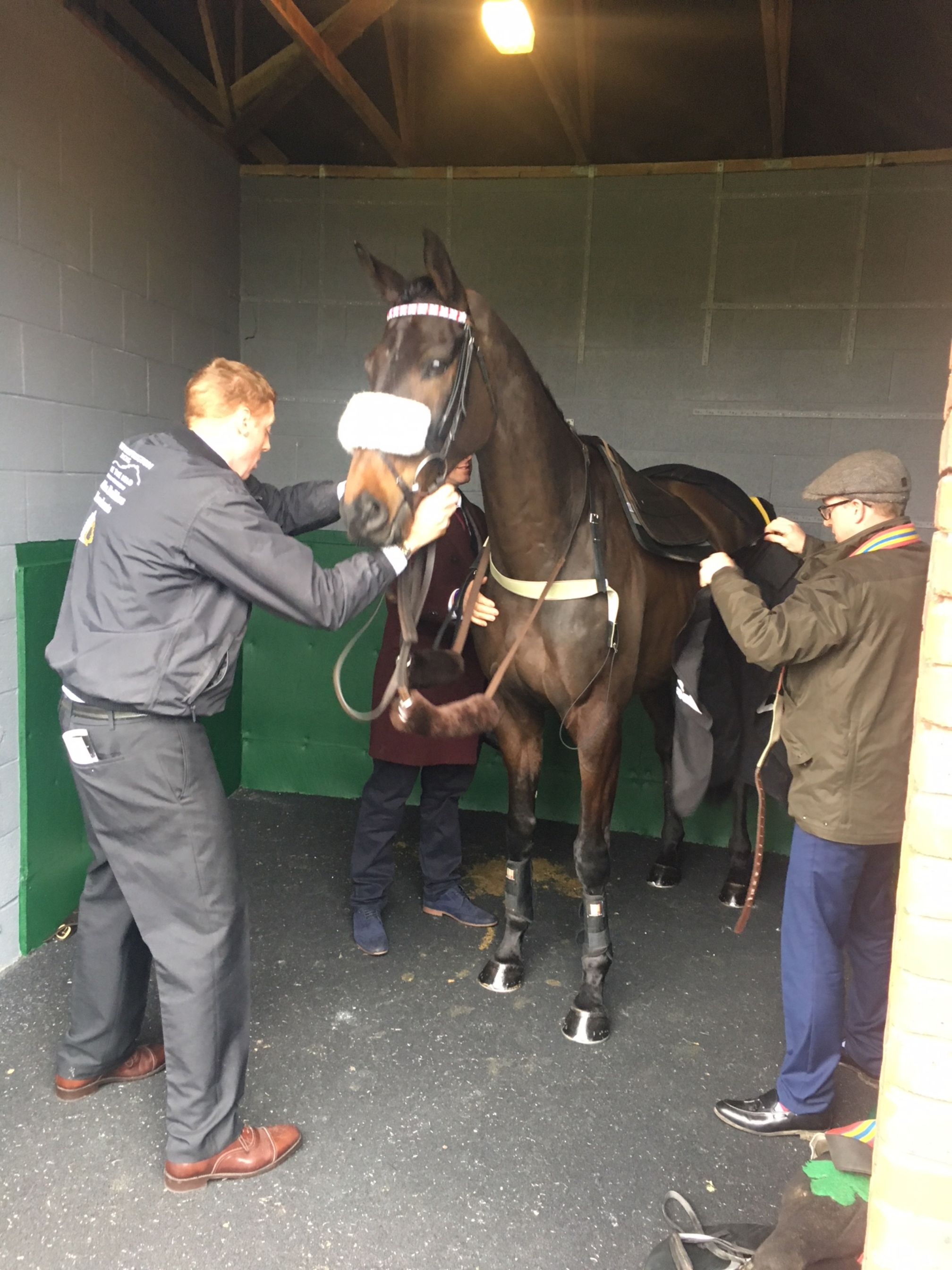 BIGMARTRE Bigmartre ran at Cheltenham yesterday in the Grade 3 Brown Advisory & Merriebelle stable plate handicap chase over 2m4.  He had been in the form of his life at home so we were looking forward to running him.  We decided that we would change tactics slightly and ride a bit of a race on him.  He jumped off behind the leaders in 6th, he travelled and jumped great over the first few and looked to be enjoying himself.  He missed the first one down the back which runs downhill, then he lost his confidence slightly and come low at the next two which put him out of contention.  Gavin then decided to ride him to finish his race, he jumped the last two really well and plugged on up the hill to finish 12th.  He will now head to the Topham over the national fences at Aintree next month. 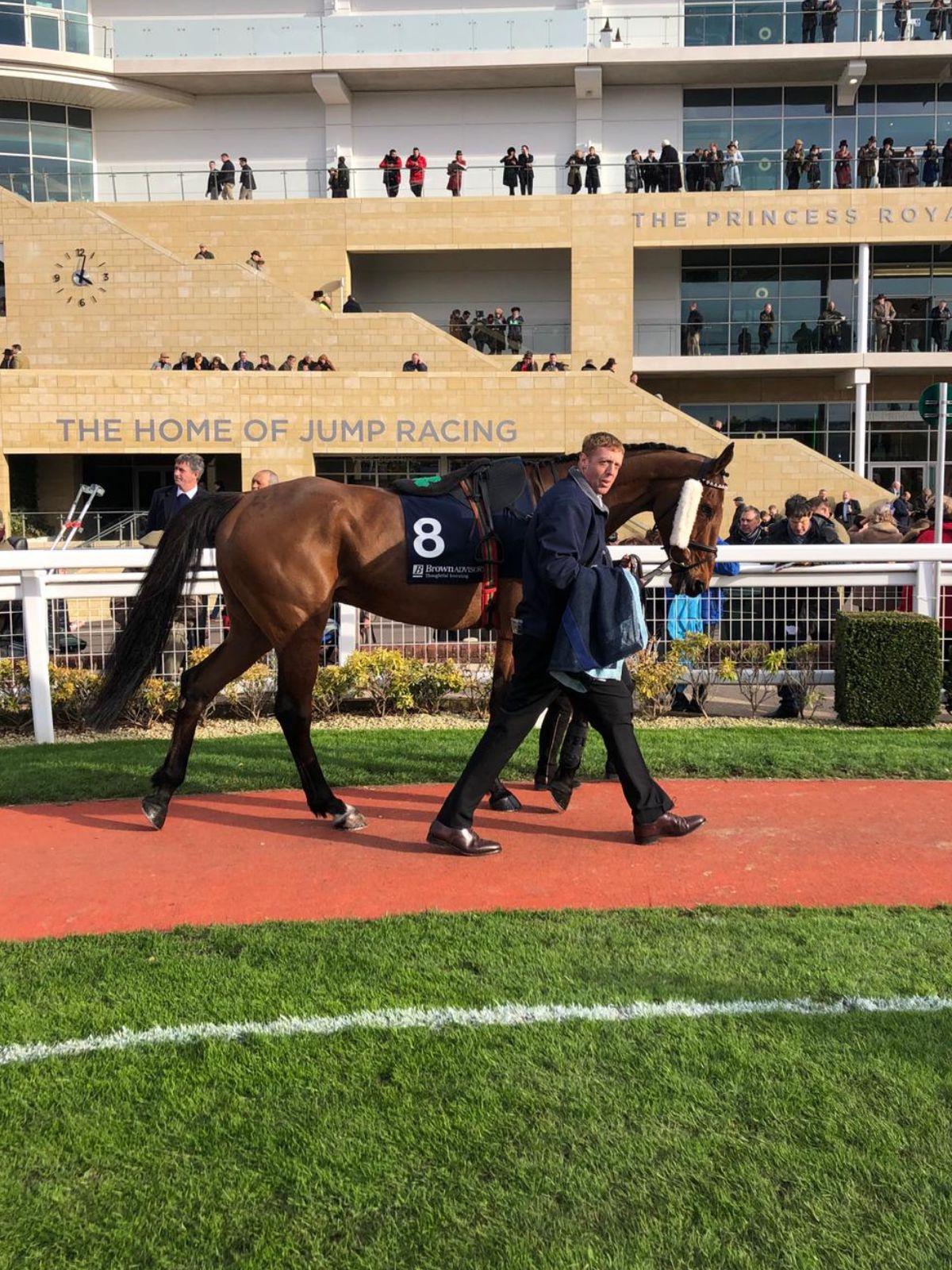 GENIUS Genius ran yesterday at Market Rasen in the first for Cheltenham specials starsports.bet handicap hurdle over 2m.  He came into this off the back of a wind operation and he had been in good form at home.  It looked the right race on paper and the plan was to settle him early to ride him to finish off his race.  He travelled over the first couple and then looked to be off the bridle the rest of the way.  Turning in he looked to be making up ground until he took a crashing fall at the 3rd last and unfortunately burst a blood vessel.   We will look to step him up in trip next time but he will probably be sent to the sales in May. ENTRIES DJIN CONTI Djin Conti holds a few entries next week in Novice Handicap Chases.  He ran a nice race last time out at Newbury to finish 4th on his chase debut and we're looking forward to getting him out again.  He is a real natural jumper and has come on for that run. 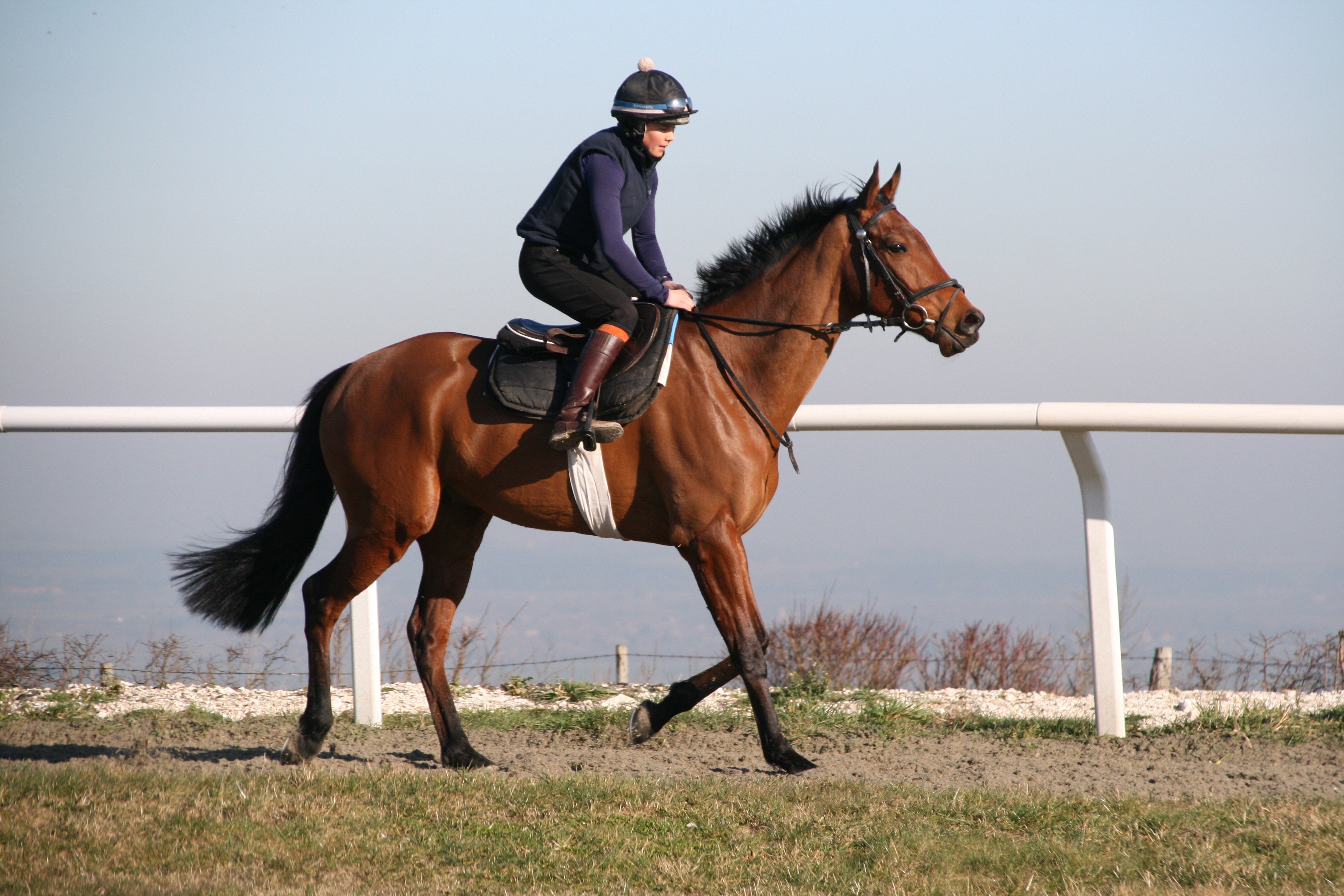 SIROBBIE Sirobbie is entered at Huntingdon on Tuesday in the Mansionbet Maiden Hurdle (Class 5) over 2m where he is likely to take his chance.  He has come out of his run at Huntington in good form.  He seemed to enjoy the experience and went better than previous hurdles outings.  There's still plenty to learn about him and hopefully he can improve again.  He is also one for handicaps in the summer. LANTIERN Lantiern also holds at entry on Tuesday at Huntingdon in the but in the Mansionbet Standard National Hunt Flat Race (Class 5) over 2m.  He has been in fantastic form since his win at Lingfield last time out.  He is ready to go again and this looks a good opportunity for him on Tuesday.  It is a conditional and amateur jockeys race and so if he runs here he will most likely be ridden by our yard amateur, Jamie Neild, who rides him every day at home.  He will want good ground so we  hope that they don’t get too much rain.  In the right conditions he should have a very good chance 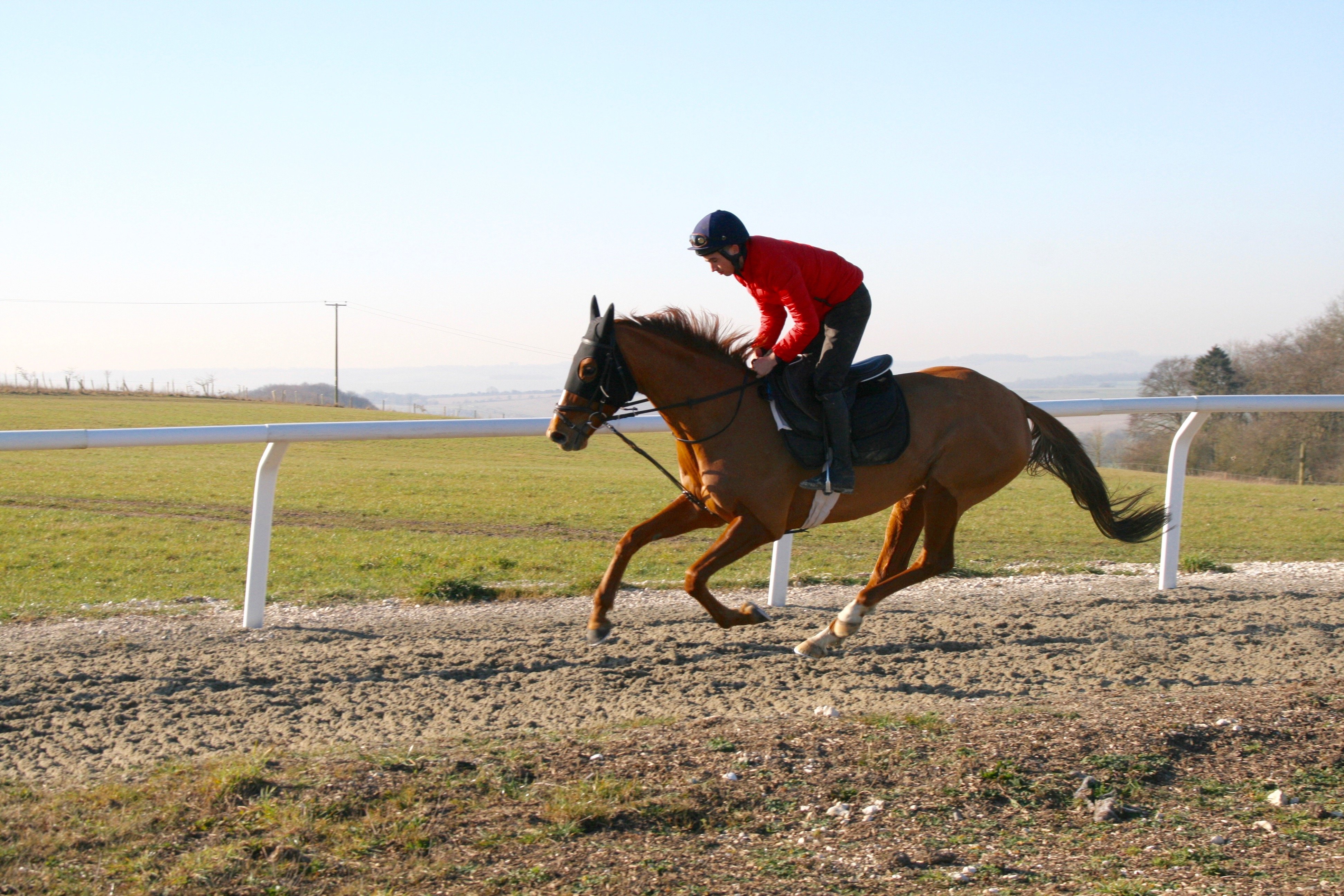 KHAGE Khage holds an entry in the Foresters By Steve White Novices' Hurdle (Class 4) over 2m at Chepstow on Wednesday.  He is in good form at home, he ran a cracking race to just get beat at Fflos Las last time out and we look forward to running him again.  The galloping nature of the tract at Chepstow will really suit him and with a downhill finish he should be difficult to pass. WEAPONS OUT Weapons Out is entered at Ludlow in G C Rickards Standard Open National Hunt Flat Race (Class 4) 2m on Thursday.  He is in good form and has been working nicely at home where he seems to have strengthened up a lot for having a short break.  He will need good ground so will only run if he gets his conditions.  He has finished 2nd and 3rd in his 2 bumper runs so far so hopefully he is able to improve to go one better this time.