THE SAD LOSS OF GLENMONA AND 2 MORE WINNERS

THIS WEEK   It was an incredibly sad day for all on Saturday having tragically lost Glenmona in the bumper at Cheltenham.  She was a very likeable and extremely tough little mare we all thought a lot of, and our journey with her had yet began.  Onwards and upwards into the new week and we've managed to score another 2 winners which has helped to lift spirits, and keep the positive vibes flowing.  However it does just go to show the highs and lows of this game are so extreme, but for now we'll just keep riding the wave...   REPORTS   Hoke Colburn got his season back on track with a gutsy win at Southwell on Tuesday.  He sat just behind the pace under jockey Harry Bannister and travelled with enthusiasm.  They went steady early on, but pace was injected down the back and this caught Hoke a bit flat footed.  He showed a good attitude to stick to the tail of the leaders and when they turned into the straight, he picked up well to challenge coming to 2 out.  He took the lead between the last 2 obstacles, pinged the last and stuck his head down to win by just over 2 lengths.  This was a huge step in the right direction and he should progress from here, particularly when he steps up in trip. 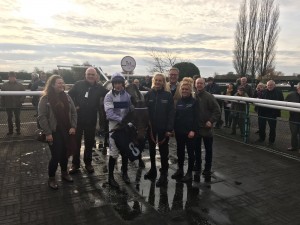 The Dubai Way made it 2 from 2 for the yard with another impressive display at Hexham on Wednesday.  He settled well off a slow pace in awful conditions and jumped well in the main.  He made a mistake going down the hill for the final time and this meant he found himself further back than ideal.  Harry asked him to close turning out of the back straight and he made stylish headway to lead coming to the last.  He jumped the last well and went away to win by just under a length.  There is plenty more to come from this horse.   Tierra Verde finished 7th on her seasonal reappearance at Southwell on Tuesday.  She raced freely from an early stage, just behind a very modest gallop.  The lack of pace didn't suit her and when Harry asked her to pick up turning for home, she couldn't quicken as well as some of her rivals.  She stayed on well in the straight, but wasn't able to produce her best in a race that wasn't run to suit.  She will be suited by easier ground and a greater test of stamina going forward.   Unfortunately Glenmona suffered a fatal injury in the bumper at Cheltenham on Saturday.  It was a very sad day for her connections and all of the team at HWR.  She will be sorely missed.   Fou et Sage finished 3rd at Wincanton yesterday.  It was a step up in trip and down in class, but unfortunately they only went steady.  He sat behind the pace and travelled well throughout the contest.  Turning into the straight he looked like he'd have a major say in the finish, but when push came to shove his run flattened out.  He eventually came home in 3rd.  He continues to run well and some better ground and a stronger gallop will suit him going forward.   ENTRIES   Star Tackle is set to have his 2nd chase start at Ffos Las later today.  He was in the process of running a big race when sadly unseating his rider on chase debut and has been in great form since.  The flat, galloping nature of the track should suit him and the heavy ground won't be a problem.  If he can put in a clear round he shouldn't be far away.   Bridge of Cally is set to make his hurdling debut at Huntingdon tomorrow.  He produced an improved performance last time out at Southwell and has schooled nicely in preparation for this.  The flat track should suit him and we plan to ride him prominently to give him a sight of his hurdles.  He is an athletic horse who is built to jump and there's plenty more to come from him.   Zephyros Bleu is set to have his 2nd start of the season at Uttoxeter on Sunday.  He ran well for a long way at Exeter on seasonal reappearance and has improved for the run at home.  The drop back in a 0-120 should really help him, as will the soft ground.  He is another who should run very well.   Simply The Betts holds multiple entries over the next week or so and the first of those is at Wetherby on Wednesday.  His bumper form is working out nicely and his schooling has gone very well.  He is a classy horse who's always shown lots of ability and we can't wait to get his hurdles career started.   Vinnie Lewis is set to make the trip up to Sedgefield on Tuesday.  He has run solid races on both chase starts this year and will enjoy the switch to softer ground.  This is a class drop for him, the track should suit and granted some luck in running he should go close.  He's been a ultra consistent horse and he deserves to get his head in front.   Court Liability is set to have his 2nd hurdles start at Hereford on Wednesday or Towcester on Thursday.  He is a very straightforward and genuine horse, who is 2 from 2 for the yard and should have a chance of winning a novice hurdle under a penalty.  Both tracks will suit him better than Sedgefield last time out and he should run a big race wherever he goes.   et's Get At It holds a couple of bumper entires in the next 10 days and the first of those is at Hereford on Wednesday.  He is an unraced 4yo by Mustameet, from the family of classy staying chaser Rocky Creek.  He is a scopey and athletic horse, with a touch of class and we are looking forward to learning some more about him.   Affaire D'Honneur is set to make his chase debut at either Musselburgh or Towcester next Thursday.  He has done well for his summer break and looks attractively handicapped on his best form.  He is an athletic horse who jumps fences well and we can't wait to get him going.  He is a talented horse.   Pasaka Boy is set to make his handicap hurdle debut in the coming days and his first option is at Taunton on Thursday.  He ran well on both his novice hurdle starts this summer, but he picked up a problem at Market Rasen and had to have some time off.  He starts handicap life off a mark of 111 and this first run back should tell us where we are with him.  Easier ground is not an issue for him.   Tangoed is set to have her 3rd hurdles start at Towcester on Thursday.  She handled the easier ground well last time at Ludlow and although she finished down the field, she acquitted herself well in a very hot race.  The stiffer track should suit her here and we are hopeful of an improved performance.